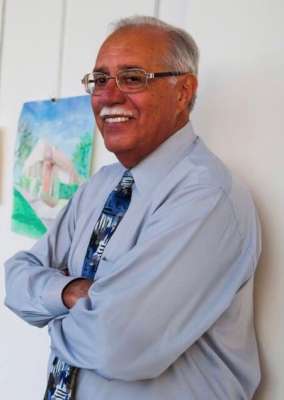 On November 27, 2018, native Arizonan Edward Lopez Pastor passed away at the age of 75 in Phoenix ending a life of service and dedication to family, community, state and country.

Born on June 28, 1943, Ed’s commitment to public service is rooted in the Arizona copper-mining town of Claypool, where he was raised by his parents, Margarita and Enrique Pastor.  As one of four children, it was in that mining town where he learned the values that would direct his life.  After completing the 8th grade, his father went to work for the rest of his life as a furnace tender and union leader at Inspiration Copper Mine, while his mother, Margarita, worked various jobs in the area, but mostly cleaned the homes of families in the mining communities of Globe, Miami, and Claypool.

Maggie and Enrique set high expectations for their children believing that if they set the bar high, their children would achieve. Ed did not disappoint them. In high school, a skinny, bespectacled Eddie Pastor excelled by earning A’s in the classroom and scoring points on the athletic field. Outside of school, Ed worked a paper route to earn money that sometimes went to help pay the family’s bills. In 1961, he was awarded a scholarship from the newspaper company he worked and enrolled at Arizona State University.

Further realizing how knowledge and education empowers us all, Ed went on to earn his law degree from Arizona State University, graduating in 1974.  By the mid- 1970s, Ed had fully committed to the growing Chicano movement – a movement that fought for the rights of Latinos and all working families who wanted a better life for themselves and their children. Ed honed his advocacy skills at Guadalupe Organization, Inc., a non-profit, community-based organization in Guadalupe, Arizona. His public service career followed with the administration of Arizona Governor Raul Castro where he advocated for workers and enforcement the Civil Rights Act. Not long into his career, however, Ed’s younger brother, Bob, was killed in a car accident in 1975. Bob’s death affected Ed deeply and brought him to the realization that elective office was one of the most effective ways for Latinos to have a strong voice at the proverbial table. In 1976, Ed successfully ran for a seat on Maricopa County Board of Supervisors, where he served for fifteen years.

Ed Pastor served the state of Arizona as its first Mexican American congressman when he won a special election to assume Congressman Morris Udall’s seat in 1991. He served for 23 years as a congressional leader on the House Appropriations Committee, the Permanent Select Committee on Intelligence, the House Committee on Small Business, the Education & Labor Committee, and the Agriculture Committee. In recognition of his keen ability to work “across the aisle” he served as deputy whip from 2010 until the conclusion of his tenure with the U.S. House of Representatives.

Always an ardent advocate and vocal champion of civil rights and civil liberties, Ed Pastor never forgot America’s working families, or the underrepresented and underserved citizens of this country. This is demonstrated by his vigorous sponsorship and stewardship of important legislation designed to raise the standard of living, increase productivity, and protect fundamental rights. Congressman Pastor was acutely aware of the global role of the United States and noted that, “we cannot survive, let alone compete, if we become protectionists and isolationists.”

The Congressman’s background as a chemistry teacher afforded him a keen understanding of the environmental challenges facing the United States and the world, and he was dedicated to the preservation of our national parks, wetlands, and natural habitats.  Long before infrastructure became a banal term, the congressman spearheaded efforts to secure funding for research, development, and construction of the Phoenix Metro Light Rail System. He also vigorously supported the Rio Salado & Tres Rio development projects believing in their intrinsic economic value to the city of Phoenix and state of Arizona.

Congressman Pastor never forgot our country’s veterans, was always sensitive to the needs of his constituents, and advocated for immigrants, in particular the “Dreamers,” by seeking to create and provided a pathway to citizenship for innocent children that only know the American way of life.  He led by his example of continuous, diligent work, mentorship, and unflagging commitment to and belief in the American dream. As President Obama remarked upon his retirement Ed was, “The first in his family to graduate college, and the first Hispanic Congressman ever elected from Arizona, Ed Pastor has spent his life fighting to give every American the same chance to work hard and get ahead that this country gave him.”

Following his well deserved retirement, Congressman Pastor continued to serve the state of Arizona and spearheaded the Pastor Center for Politics and Public Service at Arizona State University.  We are reminded of his enduring legacy with the Ed Pastor Environmental Protection Area (Pima County), the Ed and Verma Pastor Elementary School, and the Ed Pastor Transit Center, as well as many other landmarks throughout the state.

Congressman Pastor is preceded in death by his parents, and his brothers Enrique and Robert Pastor.  He is survived by his wife, Verma Mendez Pastor, his daughters, Phoenix City Councilwoman Laura Pastor (Henry Cotto), Yvonne Pastor, his grandchildren Alexis Lopez Pastor, Francisco Pastor Rivera, Eduardo Pastor-Cotto and Sophia Pastor-Cotto, his sister Eleanor Pastor, and many nieces, nephews and cousins who will miss him deeply.

Always humble, even in moments of success Ed Pastor reminded us, “Mr. Speaker, Members of the Arizona delegation and Members of the House of Representatives, I am truly honored to stand before you today as a member of this House.  I share that honor with my friends and my family, in particular my wife, Verma, and my two daughters, Laura and Yvonne.  I thank all of them for their support and hard work.  My greatest debt of gratitude goes to the people of Arizona . . . who have allowed me in this small way to make history.  I am grateful for the opportunity to serve them.”  Those of us left behind have been graced and forever changed by the force of his life.

Offer Hugs From Home Condolence for the family of PASTOR, THE HONORABLE EDWARD LOPEZ