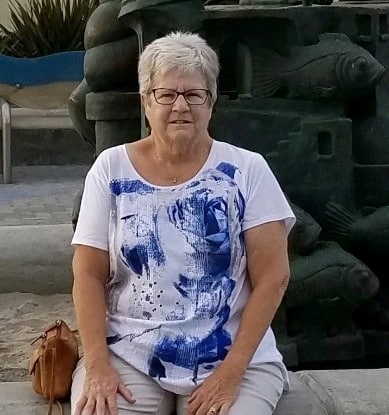 Lylia Louise Thomas, 80, of Phoenix passed and left us to go home to our Lord and Savior on Thursday, December 1, 2022 at her home after her battle with AML Leukemia. Lylia was born October 25, 1942 in Pittsburgh, PA, the daughter of Louise and Anthony LaMantia. She married Marion “Keith” Thomas on September 14, 1968 in Phoenix, Arizona. A graduate of Arcadia High School in Phoenix, Lylia held several jobs over her lifetime including Production Line Associate at Motorola, a Legal Assistant at Poli & Ball Law Firm, Sales Associate at Dillard’s Department Store, and Head Bartender at the Air National Guard NCO Club. More importantly, she devoted much of her time to raising their two children Jackie and Daniel “Danny”.

She spent her free time traveling with Keith in their RV to both Puerto Penasco “Rocky Point” Mexico and San Diego California. She loved the beach. She loved riding three wheelers and quads. She also loved watching her children and later her grandchildren compete in all sorts of sports. Whether it was baseball, softball, wrestling, soccer or basketball, she was always there to cheer them on. She was an avid fan of the Phoenix Suns, the Arizona Cardinals, and the Penn State Nittany Lions. She was also a fan of NASCAR, however, some of her fondest memories are with Keith at Manzanita Speedway in Phoenix watching sprint cars race.

In their later years, she and Keith found their home away from home at the American Legion Post 44 in Scottsdale where they made many lasting friendships. She was passionate about making sure all Veterans received the care and support they so rightly deserved. She loved to play Bingo and she loved
her time as a volunteer Bartender at the Legion.

Survivors include her husband, Marion “Keith” Thomas of Phoenix; her son Danny (Jill) Thomas of Chandler, AZ; her son in-law Reid Keilback of Phoenix and five grandchildren, Jeremy Keilback of Charlotte, NC; Cortney, Cole, James, and Carson Thomas all of Chandler, AZ. Lylia was preceded in death by her parents; her brother, John LaMantia; and her daughter, Jackie (Thomas) Keilback.

Cremation rites will be accorded. Memorial service will be held at 12:00PM on Thursday December 8, 2022 at Whitney &Murphy Funeral Home at 4800 E. Indian School Road Phoenix, AZ 85018 with Pastor Randy Williams officiating. All friends and family are welcome to come and pay their respects.

In lieu of flowers, the family has asked that donations be made in honor of Lylia to the American Legion
Post 44, in Scottsdale, AZ and/ or to Hospice of the Valley. Condolences may be expressed at www.whitneymurphyfuneralhome.com.

Offer Hugs From Home Condolence for the family of THOMAS, LYLIA LOUISE