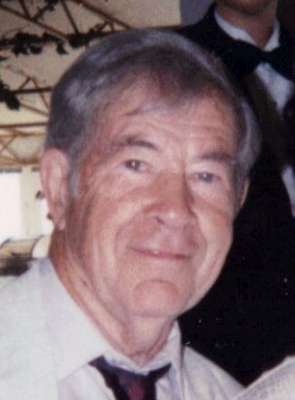 Marvin was born in Grafton, North Dakota on February 7, 1918. Marvin grew up in Minto, North Dakota and attended school in Minto as well. He graduated from the University of North Dakota with a Bachelor Degree in Electrical Engineering. After graduation he married Katherine Pearson. He worked at Philco Corp. in Philadelphia, PA on a military electronic program. Marvin left Philco in 1953 to join Motorola Inc. in Phoenix with a similar electronic assignment in military contracts where he retired in 1983. His major hobby was lathe woodworking. He made wood vases from Arizona tree sources and participated in numerous Arts and Crafts Shows in Phoenix and neighboring cities. Marvin was active in the Arizona Wood Turners Association and the Motorola Retirees Group. In April 18, 1998 he married Mary Guido; Marvin states, “she introduced me to the world”. Mary 82, lives in Phoenix at Morningstar at Arcadia Senior Living. He is preceded in death by his parents Charles Peter Thomson and Gussie May Will, brother Charles and sisters Alison, Carol, and first wife Katherine Pearson. He is survived by his wife Mary Guido, son, Mark now residing with his wife Kathy in Gilbert, grandson Wes (Gilbert) and granddaughter Nicole Van Doren, her husband Chad, and two year old son Tyler (Borrego Springs, CA) and sister Marjory (North Dakota). A Memorial Service will be held at 10am, Saturday, June 14, 2014 at Whitney & Murphy Funeral Home, 4800 E. Indian School Road, Phoenix.  Inurnment will follow at Greenwood Memory Lawn Cemetery.

Offer Hugs From Home Condolence for the family of THOMSON, MARVIN E.