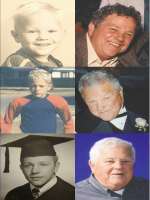 Herb C. Tiffany, Jr., President and Owner of Tiffany Construction, passed away peacefully with his entire family at his side on March 28th, 2012 after a long seven year battle with cancer. He was born to Herb and Virginia Tiffany on May 15th, 1937. He is survived by Glenna, his devoted wife of over 50 years, his cherished children Herb III (Joanne), Jill Shiriashi (Shaun), John (Pamela), Cathy Comeau (Erich), Sam (Catherine) and Amy Marshall (Jeff) , his brother Mike (Patsy), sisters Ginny Sweeny (Ed) Monnie Calfee (Martin), Jane Duffy, 12 Grandchildren and 5 Great-grandchildren.

Herb attended St. Francis Xavier Elementary School, St. Mary’s High School (where he lettered in Football and Baseball), Phoenix College and Arizona State University. He was a staunch supporter of St. Mary’s and was inducted into the Knights Alumni Hall of Fame in 2009. Herb was a long time Parishioner of St. Thomas the Apostle Catholic Church and a daily communicant. He also served as past President of The Arizona Chapter of Associated General Contractors (AGC) and was honored to be inducted into the AGC Hall of Fame.

Herb was very well known by all for his honesty, integrity, loyalty and virtue. He has received many accolades during his lifetime but family, friends and faith are what were most important to him and are what helped to sustain him throughout his battle. He has touched many and will be missed by all.

God Bless You, We Love You

“ONCE A KNIGHT, ALWAYS A KNIGHT”

Offer Hugs From Home Condolence for the family of TIFFANY, HERBERT C., JR.