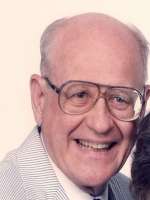 John W. Torphy, 92, passed away July 26, 2013 at Hospice of the Valley, Eckstein Center in North Scottsdale. He was born November 24, 1920 in Beloit, Wisconsin. John graduated from Beloit High School and went on to get his undergraduate and Master  Degree in Engineering  from the University of Southern California.  After graduation, he joined AiResearch/Allied Signal, where he was employed for 32 years.  A veteran of both World War II and Korea, John deeply loved his country, alma mater and profession. In 1950, John married Guadalupe “Loops” MacManus, and they moved to Phoenix in 1955. John was known as the “Pun” master, who had a great wit and dry sense of humor. He was a husband, father, grandfather, and great-grandfather. An avid tennis player, musician, and gardener, he was also past president and the oldest active member of the Park Central Chapter of Toastmasters International. John was a resident of The Terraces, where he was known for his musical talents, and his many “puns”.

John was preceded in death by his wife of fifty (50) years, Lupe MacManus Torphy, and is survived by daughters,  Mary Linda Hickel and Patty Oliver both of Phoenix, son John I. Torphy of San Diego.  John has five (5) grandchildren: Angela, Christina, Matthew, John, and Patrick all of Phoenix and six (6) great- grandchildren: Benjamin, Lucas, Lucy, Mason, Paton, and Holden.

Offer Hugs From Home Condolence for the family of TORPHY, JOHN W