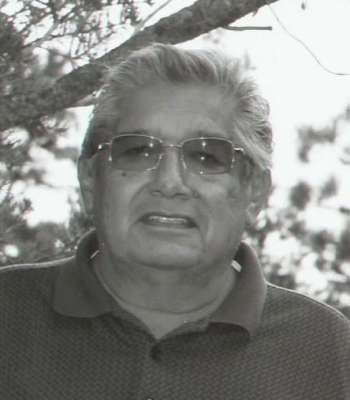 Arthur B. Torres, 79 of Phoenix, AZ. was called to heaven on Jan. 20, 2014. He was born on November 28, 1934 to the late Caesario and Luz Torres. He attended Lowell and Phoenix Technical Schools He married Alice Sotelo in 1957. In 2007 they renewed their 50th Anniversary wedding vows at St. Anthony Church, the same church where they were first married. Arthur retired after working 35 years for The City of Phoenix. He also worked as a cook, janitor, jeweler, and carpenter. Carpentry was his passion and was well known for his craftsmanship. His dream was to build a house. In 2005 he built a cabin in Heber with family and friends. He was a volunteer for St. Vincent De Paul Society for over 10 years. He enjoyed hunting and fishing in his early years and later gardening. He made the best salsa which was a constant request at family gatherings and never charged for it.  He was a very generous and humble man who would help anyone in need. Arthur is loved and survived by his wife Alice, their children; Art (Irene), Marisa, Teresa Gonzales (Bobby) and Fred (Trisha). He is adored and admired by his 12 grandchildren and 16 great grandchildren. He also was survived by his sisters; Amelia, Adelaide, Dora and Norma .He was a father figure to his nieces; Veronica, Jennifer and Rozanna. He left behind his two loyal dogs; Daisy and Blanca. Arthur’s passing was preceded by his parents, his brother Tom, and his sister Cecilia DeSoto. We love you Arthur/Dad/Tata Art, and we will miss you very much. Our hearts ache but we know you are finally home. You had a huge impact in all our lives and continue to inspire us even in your passing. We will never forget your words of wisdom and humor but most of all we’ll miss your presence. We were blessed to have you in our lives and thank you for all you’ve done for us. Descansa en Paz. Visitation will be on January 28, 2014 from 6-9pm with a Rosary at 7pm at Whitney & Murphy Funeral Home, 4800 E. Indian School Road, Phoenix.  Funeral Mass will be January 29, 2014 at 10am at St. Anthony Catholic Church, 909 S. 1st Avenue. Interment will follow at St. Francis Catholic Cemetery 2033 N. 48th Street.  A Celebration of his Life Reception will follow interment.

Offer Hugs From Home Condolence for the family of TORRES, ARTHUR B