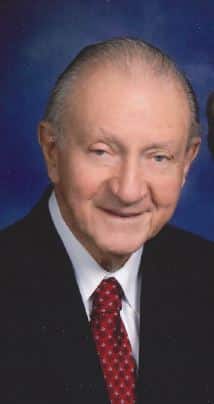 Constantine “Dean” Tsantilas, passed away in the early hours of Christmas morning on December 25, 2022, at the age of 92. He was born July 24, 1930 in Monessen, Pennsylvania. Shortly after his birth, his family was moved to what would become his childhood hometown; Cleveland, Ohio.

In Cleveland, Dean was an avid runner and active in track in high school while working at his family’s dry cleaners. It was in Cleveland that he met his bride of 67 years, Stella. In 1956, they moved to Phoenix, began a family, and opened Kachina Dry Cleaners. Just as Dean worked at his family dry cleaners in his youth, Dean and Stella’s three children all worked at “the store,” a true family business. Kachina Cleaners has been a long-standing fixture in the Arcadia neighborhood, and continues to be run to this day by his youngest son. For many years, Dean was there every morning to open the doors, start the cleaning, and greet early customers. In later years, he spent the second half of his days on the golf course or at the bowling alley with friends. He has been a member of the Holy Trinity Greek Orthodox Cathedral since moving to Phoenix in 1956.

Dean is known by many for having lived a successful life, filled with love of family. The patriarch of a home full of love, he loved and cared for his family his whole life. He will be greatly missed and will be forever in our hearts. Dean will join the souls of his father, James, his mother Bessie (Kiki), and his brother Perry. He is survived by his beautiful wife and mother to his children, Stella, their 3 children, Kiki Anastopoulos, James Tsantilas (Tammy), and Stacy Tsantilas (Gerri). He is also survived by three devoted grandchildren, Tiffany Currier (Travis), Dr. Kristine Tsantilas, and Nicholas Tsantilas.

Offer Hugs From Home Condolence for the family of TSANTILAS, CONSTANTINE “DEAN”