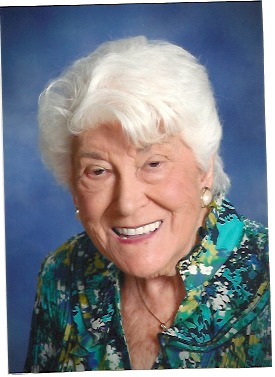 Christine H. Tseunis passed into the care of the Lord on September 12, 2018, following a brief illness. During her final days, she was surrounded by family and friends who expressed their concern, love and gratitude for a life well lived.
Christine was born January 31, 1922 in New Brunswick, New Jersey, the second child of Marianthe and George Hioteles. A first-generation Greek-American, she was raised in the Greek culture surrounded by a large and loving extended family. Christine married George Tseunis in 1948 and raised two children, Dean and Marianne. In 1962, the family moved to Phoenix, AZ where Christine enjoyed a 25-year career in the Valley National Bank Trust Department, housed in the basement of the now iconic Chase Tower in downtown Phoenix. Shortly after George’s passing in 1994, she moved to Downers Grove, IL for 18 years to be close to her youngest grandchildren. She continued to winter in Phoenix until moving back full time in 2015.
Christine had a sharp mind to the end and a positive attitude that made her beloved among her family and friends, including the residents and staff at La Estancia Nursing Center where she spent the final year and a half of her life. She was very competitive at cards, bingo and board games, enjoyed conversation, always had a smile on her face and loved being “Yiayia” to her grandchildren.
Christine is survived by her son Dean (Brenda), daughter Marianne Cortopassi (Jeff); grandchildren Trent Tseunis (Kelly), Shannon Smith (Missy), Nick Cortopassi (Lizzy) and Katie Cortopassi; nephew Jimmy Hioteles; eight great grandchildren and one great-great grandchild. She was preceded in death by her parents, husband George, brother Stephen Hioteles and grandbaby Cyciley Cortopassi.
A visitation will be held from 10:00 A.M. to 11:00 A.M. with Trisagion and Funeral at 11:00 A.M. on Tuesday, September 18, 2018 at Holy Trinity Greek Orthodox Cathedral, 1973 E. Maryland Avenue, Phoenix, AZ. Burial service is from 1:30 P.M. to 2:00 P.M. at National Memorial Cemetery, 23029 N. Cave Creek Road, Phoenix. A luncheon will follow.
Memorial donations may be made in Christine H. Tseunis’ name to Hospice of the Valley or a favorite charity.

Offer Hugs From Home Condolence for the family of TSEUNIS, CHRISTINE H.