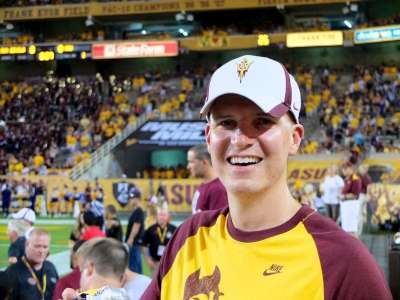 Keith Joseph Tuttle left us suddenly and unexpectedly in the early morning hours of Friday, April 3, 2015 in Phoenix, AZ. He was 36 years old.   Keith was born October 31, 1978 in Gallup, NM. He was the eldest child, and only son, of Ken and Betty Tuttle of Phoenix, AZ. Keith was an extremely loving, dedicated husband and father, an intensely devoted son and brother, and the most loyal and most giving friend a person could ever have.   Keith lived and grew up in the school district teachers’ housing of Fort Defiance, AZ, on the Navajo Nation, where he enjoyed life as one in a circle of best friends who would all become brothers, and who all remain in constant communication to this day, largely because of Keith.   He was a 1997 graduate of Rehoboth Christian High School in Gallup, NM where he was a two sport athlete. He graduated with his degree from Arizona State University in 2005 and was the biggest Sun Devils fan that anyone knew.   He was a fanatical sports and music enthusiast who loved tattoos, the outdoors, physical exercise and travel – he once circumnavigated the entire continental U.S. and drove the Alaskan coast in a single trip in his always sticker-laden Nissan Maxima. Keith had an infectious laugh, a radiant and sensitive personality, and a truly memorable sense of humor.   Keith served in the United States Navy from 2006 – 2010 where he lived and was stationed in San Diego, CA. His most recent place of employment was Silicon Valley Bank, where he had worked since 2013.   Keith is survived by his wife Elissa Keith-Tuttle and his seven children (4 sons and 3 daughters) – Ryne (7), Scarlett (4), Kaya (2), Kyle (9 months), Victoria (18), Christian (14), and Caleb (12); his mother and father, Ken and Betty Tuttle; his sister, Ellen Tuttle-Young; his brother-in-law, Bishop Tom Young; his four nephews – Zachary (9), Caleb (7), Levi (4) and Samuel (1); his circle of Fort Defiance brothers – Kahlil Gearon, Jason Franklin, Walter Mayher, Chad Farr, and Derrick Burbank, and all of their spouses, children, and parents; and countless other friends, relatives, and people who had the pleasure to encounter him. He will continually be loved and missed.   Services for Keith Joseph Tuttle will be conducted by his brother-in-law Bishop Tom Young and held on Friday, April 10, 2015, at the LDS Church: 3920 N. 44th Place, Phoenix, AZ, 85018.   The viewing will be from 10:00 a.m. to 11:00 a.m. followed by the funeral service from 11:00 a.m. to 12:00 p.m. Attendees will then be escorted to the National Memorial Cemetery of Arizona in north Phoenix (23029 N. Cave Creek Rd., Phoenix, AZ, 85024) where Keith will be laid to rest.   Arrangements entrusted to Whitney & Murphy Funeral Home.

Offer Hugs From Home Condolence for the family of TUTTLE, KEITH J.