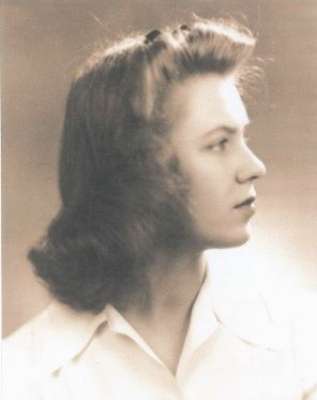 Ann Irene (Hansen) Vaaler, beloved wife of Raymond Alden Vaaler, passed away on November 21, 2014. Ann was born December 18, 1923 in rural North Dakota, the eldest daughter of Sigrid (Enkgvist) and Lawrence Hansen.      In 1945 Ann graduated from the University of North Dakota with a Bachelor of Philosophy degree. Graduating with honors, she was elected to Pi Alpha Honor Society (formerly Sigma Upsilon Nu) and was listed in Who’s Who in American Colleges and Universities. While in college, Ann was president of her sorority Delta Zeta and of the Y.M.C.A. on campus. While attending the university, she met her husband. Raymond was in his second year of medical school. They were married on June 23, 1946 and recently had celebrated their 68th anniversary.      During the last years of Ray’s medical training, they lived in Chicago. Ann was a social worker with the American Red Cross. Ray’s residency was interrupted by a tour of military duty in Korea in 1951. Ann along with their two young children returned to North Dakota during these 18 months. Post-Korea, Ray completed a residency in obstetrics and gynecology at the University of Kansas.   They moved to Minot, North Dakota where Ray practiced medicine for the next six years. Warmer climate beckoned and a decision to move to Phoenix was made in 1962 –where most of the family still reside.      Ann became active in the Maricopa County Medical Auxiliary, serving in various offices. She was president of the State Medical Auxiliary in 1975-1976. An interest in art history developed, nurtured by her daughter’s studies in art at Arizona State. Ann enrolled in classes in Tempe and later became a docent at the Phoenix Art Museum. This enthusiasm was additionally fostered by travels abroad, enjoying many treasures first hand. Deciding to enter the business world, Ann secured her real estate license and worked for several years in the Arizona Biltmore area. Later she became the office manager for Ray’s medical practice in Phoenix.    Ann’s life was not all work with no play! Ann loved the game of golf and played with friends at the Arizona Country Club, serving a term as president of the Women’s Golf Association. Playing bridge, reading, gardening, traveling and cheering for the Diamondbacks were favorite pastimes.   Ray and she enjoyed hiking Arizona trails with their son, an avid conservationist. Ann was an active member in her church associations at both Ascension Lutheran and their present church, Gloria Dei Lutheran.      Ann’s chief loves, of course, were her husband Raymond, her son James Vaaler, his wife Lynn and their two daughters, Lisa Vaaler and Christina (Stephen) Vaaler and great grandson, Alexander Vaaler; her daughter Barbara Buchanan, her husband John and their two children, Bryn Buchanan and Johnny Buchanan. Ann always thought all four grandchildren and her great grandchild were perfect and felt truly blessed to have everyone living in Phoenix.      Ann was predeceased by her parents Sigrid and Lawrence Hansen, her brothers Clifford Hansen and Walter Hansen and her sister Ruth (Hansen) Renfro. Ann is survived by her sisters-in-law Laura Hansen and Renil Hansen of North Dakota.   In addition, Ann leaves behind many loving cousins, nieces, nephews and friends.    A memorial service will be held at 1:00 pm, Monday, December 8th, 2014 at Gloria Dei Lutheran Church, 3539 E. Stanford Drive in Paradise Valley, Arizona. In lieu of flowers, please consider contributing to the Epilepsy Foundation of Arizona or the Sierra Club, Arizona’s Grand Canyon Chapter. Arrangements entrusted to Whitney & Murphy Funeral Home.

Offer Hugs From Home Condolence for the family of VAALER, ANN IRENE (HANSEN)