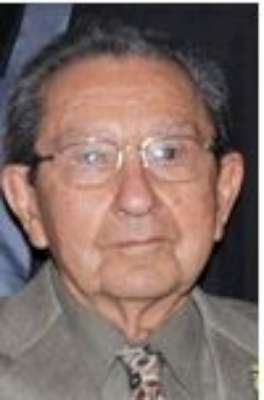 Danny R. Valdivia, beloved husband, father, son, brother and friend passed from this life into the presence of God on June 9, 2014.  Born on January 28, 1924, Danny was named Manual Daniel Robles Valdivia.  When he started first grade, his sister registered him as “Danny” and it is the name he’s used ever since.

Danny is survived by his current wife Hortensia, his children Danny (Jan), Richard (Jackie), David (Anne) and Lucille Webb (Kimball).  Danny also leaves behind 15 grandchildren and 7 great grandchildren and numerous nephews, nieces and other relatives.  Danny is preceded in death by his father and mother, Manual and Josefa Valdivia, his brothers Albert and Louie, his sister Adelina, his son Michael and his first wife of 60 years, Lucia.

After graduating from Phoenix Union High School and serving his country in World War II in the Pacific, Danny put himself through Arizona State University where he obtained a Bachelor’s Degree in finance and a Master’s Degree in Business Administration.  At the same time and as a young father, Danny never missed his children’s baseball and softball games and found the time to take his children to Encanto Park every weekend where he taught them how to swim and play golf.  Our father was a great underwater monster we never got tired of being chased by. Danny left a wonderful legacy for everyone he came in contact with.

He retired as City Finance Director in the late 1980s after working 37 years for the City of Phoenix.  While at the city he received numerous awards including being recognized nationally for his work as City Auditor, an award he was nominated for by then Mayor Margaret Hance.  One of Danny’s most memorable experiences was attending the Massachusetts Institute of Technology, Center for Urban Executives on behalf of the city and obtaining a certain measure of notoriety when he beat everyone in table tennis. Throughout his life Danny excelled at everything he did.  Whether it was serving as one of the youngest Commanders at Post 41 of the American Legion, starting a civic club or enjoying his favorite pastime, 18 holes of golf, Danny was determined to excel.

Our father, Tata, and husband will be sorely missed but we are all very grateful for the time we had.

Offer Hugs From Home Condolence for the family of VALDIVIA, DANNY R.