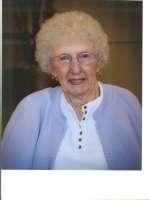 Fran passed away peacefully on September 8, 2011. She was born December 31, 1921 in Bloomfield, New Jersey. She married the love of her life and best friend, Kenny on June 6, 1943. Fran and Kenny had 53 years together before he passed away in 1996. Fran had severe asthma at a young age and was often bedridden for long periods of time. Her doctor advised her to seek a warmer, drier climate, so she left New York with her young family and traveled by train to Phoenix. Once in Phoenix, her health improved and although not cured, had less frequent, less severe bouts with asthma. Her family was large and she enjoyed spending time with all of them. She never missed an opportunity to attend or join a family vacation, birthday party, backyard barbeque, school recital or sporting event involving a family member. She enjoyed the Diamondbacks and often joked about how surprised her husband Kenny would have been if he knew she watched almost every game on television. She was a great homemaker and had a knack for baking the best cookies, and was often referred to as the “Cookie Lady”. You could always count on a batch or two for any occasion or holiday. We have all been blessed to have her in our lives and she will be missed immensely. Fran is survived by and a loving mother to her four children and their spouses, Ken Jr. (Barbara), Fran (Bryan), Patti (Bill) and Bob (Sara). She was affectionately called “Nanny” by her 9 grandchildren and 11 great-grandchildren. Her grandchildren include; Timothy Van Houten, Jennifer (Van Houten) Fusselman, Tia (Rifley) Marshall, Patrick Rifley, Erin (Rifley) Mendez, Steven Nicks, Brian Nicks, Jeffery Nicks (Deceased), Katie (Van Houten) Jimenez and Chris McCorkle. Great-grandchildren include; Alexis and Tyler Fusselman, Bailey and Hannah Marshall, Cannon, Ryan and Peyton Mendez, Ashlyn and Benjamin Rifley, Addison and Emma Nicks and Jake and Aidan Jimenez. Fran is survived by three of her four sisters, Pat Dellisanti, Joyce Stenquist, Betty Threlkeld and Edie Holub (Deceased). She is also survived by numerous nieces and nephews. A Visitation will be held on Sunday, September 11, from 2:00-4:00 pm, with a Rosary at 3:00 pm at Whitney & Murphy Funeral Home, 4800 E. Indian School Road, Phoenix, AZ. Funeral Mass will be held on Monday, September 12, 2011 at 10:00 am at St. Francis Xavier Catholic Church, 4715 N. Central Avenue, Phoenix, AZ. Interment will follow at St. Francis Catholic Cemetery, 2033 N. 48th Street, Phoenix, AZ where she will be buried with her husband Kenny.

Offer Hugs From Home Condolence for the family of VAN HOUTEN, FRANCES ELIZABETH