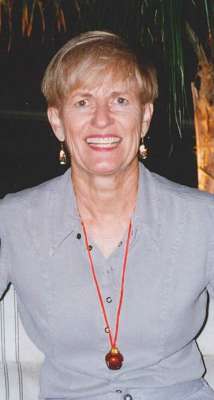 Madeline Vander Ploeg-Branson of Scottsdale and Sedona departed this world on June 20, 2014.  Born in Pontiac, MI in 1938, a beloved middle child to Harry and Lessie Van Matre, Madeline spent her life collecting friends, starting when her family had the first TV set on the block and their home became a destination.  An excellent student, she was an Alpha Delta Pi sister at the U. of Michigan, where, on spring break, she met her first husband Roger Vander Ploeg, in the Ft. Lauderdale “Elbow Room.”  In 1971, they moved to Arizona with their two children, Terry and Ellen.  After that marriage ended, Madeline set out on her own and became a highly successful realtor in Scottsdale where she met Jim Branson, who became and remained her dear companion for 37 years.  In 1966, they relocated to Sedona where she continued her meteoric success in real estate.  Madeline was well-known for her love of tennis, crazy earrings, martinis, fine wine, happy hour, any sale rack, her calligraphic handwriting, her wild Bunco games, her Yahtzee-game and Sudoku-puzzle mastery, her golf boast of a Hole-in-One (her license plate), her epic reputation as a hostess, and her wanderlust, having traveled the world.  In 2007, Madeline suffered a stroke during one of her daily walks.  She met this setback with great courage and a rugged determination to maintain her lifestyle.  Though she lost her ability to walk and speak, she never lost her wit, her sense of humor, and her love for her many friends.  Madeline finally met her end after a long battle with pneumonia.  She is survived by her husband Jim, her son Terry and wife Rhetta, her daughter Ellen and husband Roger Kohrs, her brother Harry, and grandchildren Sonnier and Jake Vander Ploeg, and Holden Kohrs.  Our gratitude goes out to the loving care she received at The Heritage at Carefree.  In traditions well established by Madeline, there will be a massive cocktail party at her daughter Ellen’s house in Cave Creek in September.  For those who would like to join in this celebration and raise the traditional toast to “Caledonia”, contact Ellen at erkohrs@msn.com. Arrangements entrusted to Whitney & Murphy Funeral Home.

Offer Hugs From Home Condolence for the family of VANDER PLOEG, MADELINE MARIE