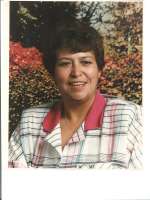 63, passed away on March 20, 2010, surrounded by her family
and religious community. Wally was born on July 9, 1946, in Flagstaff to Tomas and Sofia Vega. She was preceded in death by her mother, Sofia Alfaro Vega and her brother Francisco. Wally attended schools in Flagstaff. As a teenager, she worked at Eddie’s Drive In and La Casita Mexican Restaurant. After graduation from Flagstaff High School in l964, Wally entered Sacred Heart Monastery in Yankton, South Dakota, where she served as a Benedictine Nun for five years. After leaving the Monastery for medical reasons, Wally attended Blair College in Phoenix. She worked for several physicians in the Phoenix area and retired after twenty years of employment as a medical assistant and radiology technician at Pueblo Family Physicians. Wally was an active member of St. Augustine’s Parish, where she served as Youth Minister, Coordinator of Ministry of Care and fund raising until she entered Our Lady of Guadalupe Monastery. Wally was an Associate with the Sisters of St. Benedict at Our Lady of Guadalupe Monastery from 2002 until her death. Wally coordinated all of the retreats and provided hospitality for all who came to the Monastery. Wally is survived by her father, Tomas Vega, Flagstaff, her sisters and brother; Loretta (Lupe) Velasco, Flagstaff, Rachel (Randy) Casaus, Las Vegas, NV, Virginia (Henry) Martinez, Laveen, Steve, Flagstaff, Victoria (David) Diaz, Flagstaff, Norma (Dale) Wallace, Phoenix, and her religious community; Sister Linda Campbell and Sister Lydia Armenta. She is also survived by 28 nieces and nephews and 32 great-nieces and nephews and 1 great-great nephew, as well as a large extended family. Wally’s favorite past times were listening to Mexican music, Mariachi music and her frequent flier miles to Las Vegas and Laughlin. She was a very special person and will be greatly missed. In lieu of flowers, donations may be made in memory of Wally to Our Lady of Guadalupe Monastery, 8502 W. Pinchot Ave., Phoenix, AZ 85037. Services: Visitation will be Tuesday, March 23, 6-8 p.m.; with the Rosary at 7 p.m. The funeral will be Wednesday at 10 a.m. Visitation and Funeral Service will be held at Our Lady of Guadalupe Monastery, 8502 W. Pinchot Ave. (Enter the Monastery from 8500 W. Thomas)

Offer Hugs From Home Condolence for the family of VEGA, OLIVIA V.