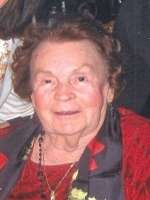 86, passed away on May 25, 2011. Charlotte was born in St. Wendel, Saar, Germany as Charlotte Rose Marta Schorr to Jacob and Rosina Schorr. Charlotte attended college in Mannheim. In 1949, Charlotte came to America to learn the English language and to escort her cousin, Marie Jene. Marie’s brother was a Catholic priest in Leeds, North Dakota. Charlotte met and married Joseph Muehlen, a farmer, in 1950. They resided in Penn, ND and had two children, Mary Louise and JoAnn Charlotte. Charlotte loved to swim, play tennis, golf and write stories. Joe and Charlotte loved to hunt and fish. Charlotte served for many years at Immaculate Conception Church in Penn as choir director and organist. She served as Secretary, Vice President and President of the Penn Altar Society. She was active in P.T.A. and received the Topper Award; she was a 4-H leader for nine years for Penn Girls 4-H club; and she served on the North Dakota Board of Directors of the Fall Fair in Devils Lake for eleven years. In 1961, she received a diploma as Interior Decorator from Lake Region Junior College. After Joe passed away in 1977, Charlotte attended the LPN program at the Lake Region Junior College and the American College of Natural Healing Sciences in Mesa, AZ. She graduated as a Massage Therapist, joined the North Dakota and American Massage Therapy Associations and was licensed in North Dakota, Scottsdale and Phoenix, AZ. In 1980, she married Vlast Vejtasa and moved to Edmore, ND. They owned and operated the Health Clinic, where their main goal was helping others to improve their health. Vlast and Charlotte were active in the N.D. Massage Therapy Association and traveled extensively attending conferences. After Vlast’s death in 1987, Charlotte ran the Edmore Health Clinic. In 1989, she moved to Scottsdale, AZ and continued to work until she retired in 2003, after completing 24 years as a licensed massage therapist. She worked for La Camarilla, Friedman Chiropractic Center and treated her own private patients. Charlotte was a vivacious person, who loved life. She is survived by daughter, Mary Muehlen Maring, David (husband), Christopher and Andrew (grandsons) and daughter JoAnn Gaffaney, Jerry (husband), and Sean and Jaclyn (grandchildren). Visitation will be at 12:00pm, Saturday, May 28, 2011 followed by a Memorial Service at 1:00pm at Whitney & Murphy Funeral Home, 4800 E. Indian School Road, Phoenix. In lieu of flowers, the family would request donations to Hospice of the Valley, 1510 E. Flower Street, Phoenix, AZ 85015.

Offer Hugs From Home Condolence for the family of VEJTASA, CHARLOTTE (Lottie) Muehlen