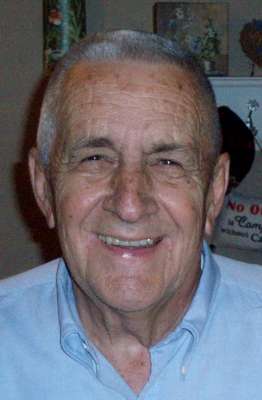 “Gerry,” 82, passed away on November 1, 2014. Born on March 1, 1932, in Manchester, N.H., Gerry earned his undergraduate degree from St. Anselm’s College. Following two years in the Army, stationed at Fort Huachuca, Gerry graduated with Masters Degrees from Rensselaer Polytechnic Institute in Troy, NY and Arizona State University in Tempe, AZ. Before moving his family to Phoenix in 1965, he worked for General Electric in Schenectady, NY and retired from GE/Honeywell in 1985. He was passionate about all sports, 24/7. He was a devoted fan to the Boston Red Sox, ASU, Phoenix Suns, AZ Diamondbacks, Cardinals and Coyotes. Gerry was dedicated to Brophy College Preparatory athletics, and was a member of the Dad’s Club. As a former newspaper writer, he read every article in the newspaper daily. He was known throughout the North Central neighborhood for walking his dogs and greeting everyone with a smile and a story. He was an avid listener to music, especially Big Band and Jazz. Gerry is survived by his wife of 57 years, Jacque, and his five children: Ken, Kim (Michael), Kevin, Keith (Lori) and Kris (Mandy); grandchildren: Courtney, Richard, Christopher, Brian, Jacqueline, Jake, Brooke and Cole; and brother, Brigadier General Richard Vercauteren, USMC, Retired (Gail). Gerry will be dearly missed, but we take comfort in knowing he now has the best seat in the house at all sporting events. Viewing from 4:00-6:00pm on Wednesday, November 5, 2014, with Rosary from 5:00-5:30pm. Funeral Mass Thursday, November 6, 2014, at 4:00pm, with both services at Brophy Chapel, 4701 North Central Avenue in Phoenix. In lieu of flowers, donations can be made in his name to Brophy College Preparatory athletics.

Offer Hugs From Home Condolence for the family of VERCAUTEREN, GERALD “GERRY” K.