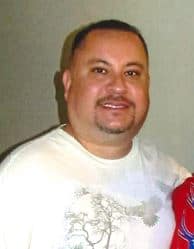 Enrique was happily married to his best friend, Joanne C. Villela, who preceded him in death on February 8, 2021. They shared two fur-baby Beagles “Maximus and Bella”, who will miss them dearly.

Enrique was a very kind-hearted, joyful and compassionate person whose generosity was abundant and love was endless. He had a heart of gold and often helped others without hesitation and/or question. Enrique loved his family and friends deeply and was loved by so many because of his beautiful personality.

Enrique’s most beloved holiday was Halloween, which was also his and Joanne’s wedding anniversary. He enjoyed celebrating the holiday by decorating meticulously and celebrating with his wife and family. Enrique was a huge Disney fan, and his favorite movie was The Nightmare Before Christmas. He had a passion for music, photography and collecting memorabilia.

Enrique was preceded in death by his wife, Joanne C. Villela; and mother, Tomasa H. Villela.

Enrique will be greatly missed, but never forgotten. Memories of him will live on and remain in our hearts…forever.

Offer Hugs From Home Condolence for the family of VILLELA, ENRIQUE “HENRY”