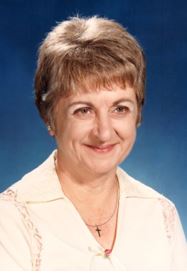 Dorothy P. Volini, 79, passed away peacefully at her home in Scottsdale, AZ on October 22, 2015. Dorothy was a loving and devoted mother of six children and grandmother of four. She was born in Chicago, Illinois on February 12, 1936, to Helen (Walz) and Milton Plambeck. A top graduate of Mundelein College and George Peabody College for Teachers, she worked for Catholic Charities where she taught the blind and partially sighted. Dorothy married Camillo E. Volini on September 19, 1959, and was blessed with her children Theresa “Teri”, Virginia “Gini”, Camillo “Cam”, Dorothea “Dolly”, Vincent “Vince” and Joseph “Joey”. In 1975, the family began their life in Phoenix, AZ and shortly thereafter Dorothy reentered the workforce as a 1st grade teacher at Baltz Elementary School until she retired in 1996. She was passionate about teaching children and took great pride in promoting the literary word. Always yearning to learn and see the world, she traveled extensively throughout the Orient, Europe, the Caribbean, Canada, Mexico and the United States. Dorothy was an avid reader, an amazing intellectual and supportive conversationalist, and a Jeopardy and Wheel of Fortune enthusiast. Dorothy dedicated her retirement years to her children and grandchildren Nicolette, Steven, Jeremy and Rachel, her many friends and extended family as well as her volunteer work at Our Lady of Perpetual Help. She was a devout Catholic, a crutch to many and a burden to none. She lived her life to the fullest and truly had no regrets. Dorothy will be joyously welcomed into heaven by the Holy Spirit, her husband Camillo and her youngest son Joseph. She is also survived by her sister Marion Swanto, brother Robert Plambeck, son in law Michael Bayne (Dorothea), many nieces, nephews, cousins and in laws. Dorothy’s eternal wings will be forever comforting and our love for her is everlasting. Friends and family are invited to attend a mass and reception beginning at 10:30am on Friday, October 30, 2015, at the Franciscan Renewal Center Casa de Paz y Bien, Our Lady of Angels, 5802 E. Lincoln Drive, Scottsdale, AZ 85253. Interment will be private. In lieu of flowers, donations should be made to Andre House of Arizona.

Offer Hugs From Home Condolence for the family of VOLINI, DOROTHY P.