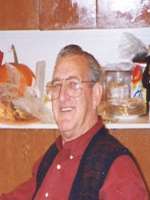 Wagner, Donald Eugene
was called home January 19, 2010. Born “upstairs” on September 2, 1935 in Gatcherville, PA. “Gene” was the outstanding athlete of York County, PA in l953 as a high school senior. He met the love of his life in Spokane, WA as an Army Staff Sergeant from l954 to l957. Don was a long-time electrical contractor in the Phoenix area since l964, co-owner of Christian Electric Corp., member of the local Moose Lodge and an avid golfer. Don quietly and humbly assisted the less fortunate around the valley. Preceded in death by his daughter and son-in-law Deborah and Bill MacMillan. Survived by his loving wife of 53 years Barbara, son Donald, Jr. and his wife Kathleen, daughter-in-law Cindy Kramer, God-daughter Christina Calio and 7 grandchildren; Stephanie Spangler, Meghan MacMillan, Charles Wagner, Andy MacMillan, Sean Wagner, Jake Wagner and Brody Wagner. Also survived by his sisters Janet Wagner, Charlotte Overmiller and nieces and nephews in the Pennsylvania area. The Wagner family wishes to extend our love and gratitude to those family, friends and caregivers who so graciously gave their time and support these past years. A special thanks to our “Angels” who guided us on our path. Don’s house was always open to family and friends for a good meal and a good laugh. A Memorial Service will be held at 11:00 am, Saturday, January 23, 2010 at Whitney & Murphy Funeral Home, 4800 E. Indian School Road.
In lieu of flowers, the family requests donations in Don’s name to St. Mary’s Food Bank, 2831 N. 31st Ave., Phx 85009 or Hospice of the Valley, 1510 E. Flower St. Phx 85014

Offer Hugs From Home Condolence for the family of WAGNER, DONALD EUGENE