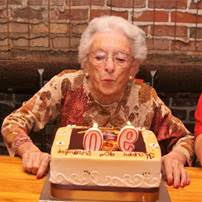 Geraldine Wagner passed away at the age of 91, on January 22, 2018, at Vista Senior Living in Phoenix, Arizona. A native of Buffalo, New York, Geraldine has been a Phoenix resident for over 30 years. Geraldine was born on April 3, 1926 in Buffalo to Louise and George McDermott. She had two siblings, Patricia and James. Geraldine lived in Buffalo for a majority of her life, and at the age of 18 she met her husband Edward at an ice cream shop. They were married quickly after on April 6th, 1945. Geraldine and Edward had four children all born and raised in Buffalo: Tom, Mike, Mary Louise, and John. Geraldine was a loving and caring mother and head of the house for years, and eventually went on to be the Amherst Town Court Clerk. Geraldine was past President of the Bishop’s Committee of Western New York and she, along with Edward, were active in the Buffalo Detectives’ community and were well known throughout the city. In the 1980’s, Geraldine retired and moved to Phoenix to join much of her family out west. She was very close to her grandchildren and great-grandchildren, including Joseph, Jacob, Ronald, Sean, Anne, Drew, and Jennifer. Geraldine was active at multiple Catholic parishes in the valley, loved helping raise many of her grandchildren, had a passion for ceramics and crafts, could never turn down a cup of tea with cream and sugar, and was known for her quick-witted sense of humor. Geraldine, who often went by “Gerry” or simply “Grams” touched the lives of countless people in both Phoenix and Buffalo, and will be deeply missed by her friends and family. After 42 years apart, Geraldine is at peace with her husband, Edward, and to be laid to rest with him in Buffalo. In lieu of flowers the family requests that donations be made to the Dominican Nuns of the Monastery of Our Lady of the Rosary – www.geraldinewagnermemorial.com
A Funeral Mass will be celebrated on Saturday, February 3rd, 2018 at 3:00 P.M. at St. Francis Xavier Catholic Church, 4715 N. Central Avenue, in Phoenix, with a reception immediately following the funeral at Ajo Al’s Restaurant, 5101 N. 16th Street, Phoenix. Arrangements entrusted to Whitney & Murphy Funeral Home, 4800 N. 48th Street, in Phoenix.
A Graveside Service will be held at St. Matthew’s Cemetery, 180 French Road, West Seneca, New York, on Friday, February 9th, 2018 at 11:00 A.M., with Interment at St. Matthew’s Cemetery, 180 French Road, West Seneca, New York. A reception immediately following the service at Scharf’s German Restaurant, 2683 Clinton Street, West Seneca, New York.

Offer Hugs From Home Condolence for the family of WAGNER, GERALDINE