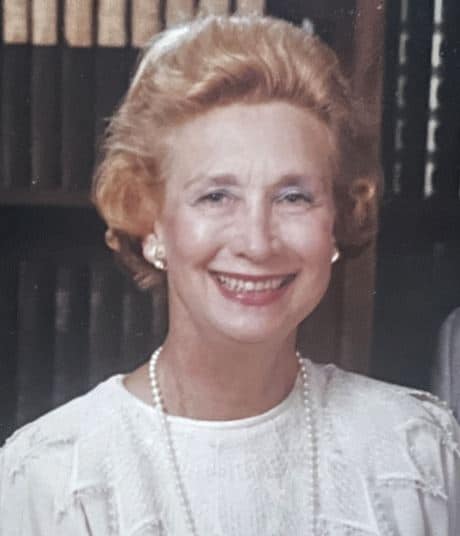 Dorothy K. Wales peacefully reposed in her apartment on June 22, 2022 in Phoenix, Arizona. She was born July 15, 1924 to Marie and Christopher Kotthoff in St Louis, Missouri.

She retired from the business life to rear their first daughter, Elizabeth Marie, born July 27, 1957, and later after moving to Phoenix, Arizona, the arrival of Mary Celine Wales. She delighted in homemaking skills and gardening, especially camellia flowers. It was under her care that she defied the desert climate and grew a multitude of camellias, which she happily distributed to friends and strangers alike.

Her degree in English and Speech led her to a fourteen year stint as a volunteer broadcasting the Wall Street Journal for Sun Sounds, a radio station for the visually impaired. She was a pioneer with Sun Sounds, starting with a tiny space with barely enough room for the engineer, an occasional guide dog, and the broadcaster. Sun Sounds has today spread throughout the state and has been regularly acclaimed for its focus.

Her finest spiritual blessing was her induction into the Order of Malta as a Dame. While unable to physically travel, she distributed water from Lourdes, France.
She was preceded in death by her parents, her brother, Christopher, her daughter, Elizabeth (Lissa) in 2005, and husband, Hal, in 1996, beloved father to Lissa and Mary.

She will be greatly missed by her daughter, Mary, and her husband, Randy, as well as her grandson, Andrew, and his wife, Breanne, and her great-granddaughters, Evangelia and Eleni.

Funeral Mass will be celebrated on Thursday, June 30, 2022 at 10:00am at St. Francis Xavier Catholic Church, 4715 N. Central Avenue. Interment to follow at St. Francis Cemetery.

Offer Hugs From Home Condolence for the family of WALES, DOROTHY KOTTHOFF