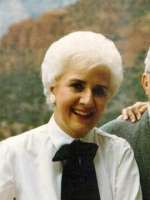 Geraldine (Jeri) S. Wallace was born in Springfield, Illinois to James M. and Edna Sullivan in 1928.  She was the youngest of four children and only one sister is still living in Seattle, Washington.

Jeri was a certified public accountant and, had her own firm with Trent Cosse in Sedona, Arizona.  Jeri had four college degrees, but the degree she loved most was her C.P.A.  She passed the CPA exam before finishing her accounting degree on the first attempt.

Jeri married Robert Wallace, M.D. in Wichita, Kansas in January 1961.  There were no children born to this union.  She was active in the Junior League of Wichita, Kansas and later transferred to the Junior League Transfer group in Phoenix, Arizona where she often played bridge and helped in raising funds for their charities.  She loved traveling and bridge.  Always energetic and imaginative and smiling.  She will be missed by her many friends, nieces and nephews and her husband of fifty-two years.

In lieu of flowers, honor Jeri with a gift to St. Thomas the Apostle Catholic Church at 24th and Campbell.

Offer Hugs From Home Condolence for the family of WALLACE, GERALDINE (JERI) S.