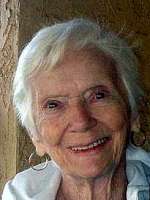 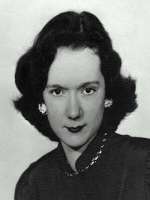 Phyllis Anne Wanberg died peacefully of natural causes at home, November 26, 2012 with her beloved dog Jade by her side.
She was born April 27, 1929 to Flossie and Hiram Hill in Ottawa, Ohio. She graduated from Ottawa High School and later attended Phoenix College in Phoenix, AZ. Phyllis moved to Phoenix with her children in 1958. She loved the climate of the desert, the friends she made and the opportunities Phoenix offered. Mrs. Wanberg (then Faust) worked for the Bell System (Mountain Bell) for 32 years before retiring in 1982 to move to Anchorage, AK. In 1980 she met and later married Mr. John Wanberg of Anchorage. In him she found the love of her life. She enjoyed flying with her husband and they made several trips back and forth to Phoenix in their plane. They spent several years living part-time in the Valley until she resettled in Anchorage where she found a new place to call home. Phyllis loved the “Last Frontier” and spent over 20 years living in Alaska before returning to Phoenix in 2004 to be closer to her family. Her family and friends knew her as an independent woman with a stubborn streak. She often referred to herself as a “Stubborn Old Broad.” She had great compassion for people and was generous and kind to everyone she met. She loved young people and was a role model for many. She is survived by her son Greg Faust and wife Cari of Phoenix, daughter Diane Sadler and husband Terry of Durango, CO, grandson Cory Faust and fiancé Wendy Wright of Phoenix, grand-daughters Becky Gadberry and husband Heath of Fairbanks, AK, Marissa Sadler and fiancé Terence Garrett of Denver, CO, great grandchildren Taylor and Conner Gadberry, Daschel Garrett and sister Bette Reese of Findlay, OH. Included in her extended family are her great friends Jane “Petie” Kail of Phoenix, Rich Little of Sweet Home, OR and many nieces and nephews. She is preceded in death by the love of her life, John Wanberg of Anchorage, AK and by Albert A. Faust of Shelby, OH. Phyllis requested no services, but that you celebrate her life in a simple way that you see as fitting for her life. In lieu of flowers, the family is requesting donations be given in her name to either the Arizona Humane Society www.azhumane.org or the Veteran Tickets Foundation, an organization that gives tickets to sporting and other events to veterans at www.vettix.org.
The family would love to hear your thoughts and memories at www.tributes.com.