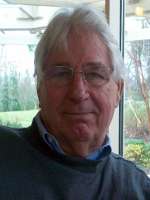 Age 74, passed away February 1, 2011. He was born on June 29, 1936 in Tucson. The Wanslee family arrived in Arizona shortly after the Civil War and Pat took great pride in being a fourth generation Arizonian. After graduating from Tucson High School and attending the University of Arizona, Pat served his country and was a proud veteran of the United States Navy. He received several awards, including a Presidential Citation. Pat followed his father’s footsteps by working in the car business and pioneered Arizona’s automobile auctions. Throughout his life, Pat was a friend to all, generously giving to those in need. Most recently, he delivered food boxes for St. Vincent de Paul. He was a member of St. Francis Xavier Church where he served as an usher and enjoyed fellowship after Mass each Sunday. Pat often said that the luckiest day of his life was when he met and married the love of his life and best friend. Mary Ann, on the same day. While Pat and Mary Ann enjoyed only a few hours of courtship, they were blessed with many years of marriage. He is survived by Mary Ann, his son David (Michele) and his twin daughters Madeleine (Brian Mullen) and Melissa (Bob McCullough). He is also survived by four grandchildren, whom he adored, Rachel, Rebecca, Carmel and Benjamin Patrick. He was preceded in death by his beloved sister Sharon Fensch. Pat Wanslee was admired and loved for his generous spirit, optimism, wonderful sense of humor and great love of life. He will be deeply missed but memories of him will live on in the hearts and minds of those who loved him dearly. Our celebration of Pat’s life begins with Visitation from 4 to 9 pm, Rosary at 6:30 on Friday, February 4, 2011 at Whitney & Murphy Funeral Home, 4800 E. Indian School Road, Phoenix. Funeral Mass at 11:00 am on Saturday, February 5, 2011 at St. Francis Xavier Catholic Church, 4715 N. Central Avenue, Phoenix. Interment will follow at St. Francis Catholic Cemetery.

Offer Hugs From Home Condolence for the family of WANSLEE, PATRICK CLINTON