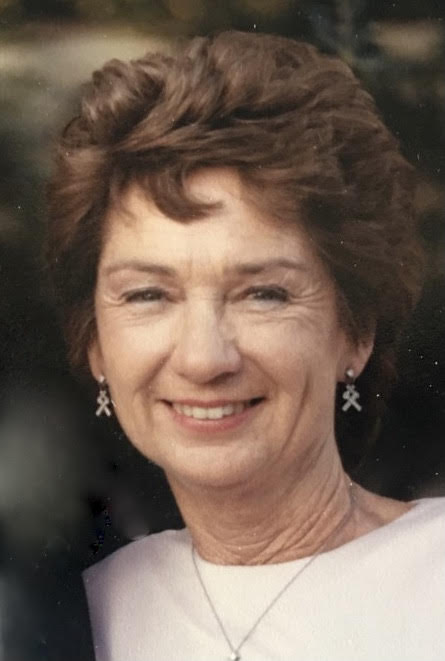 On the gate it said “Journey’s End” and Joan said, “We will have to think of a better name for our new home.” It was the oldest residence on Camelback Mountain, well known for a seasonal Merry Christmas sign visible across the Valley. Her husband Jim said “not me; this place will be the end of my journey” …. And about fifty years later, it was. And three years after that, Joan has concluded her journey.

Joan Anne Warne passed on December 5, 2022 after a full and eventful life. Officially, she was born May 31, 1928 in Beverly Hills in Chicago, Illinois. Her mother “corrected” her birth certificate to May 30 with a pen, so Joan resolved the issue by celebrating both days throughout her life. Joan was the youngest child born to Dorothy Gertrude Sutherland and Charles Francis Gardner, a bricklayer. Her four siblings were Dorothy, Lucille, Ruth, and Charles Jr. Joan attended Morgan Park High School followed by Morgan Park Junior College with a scholarship, and then worked her way through Northwestern University.

While visiting New Mexico, Joan met James Ernest Warne, Jr. (Jim), son of a Bisbee, Arizona copper miner. Jim and Joan were married on January 26, 1951 after a three-month courtship, and celebrated their 69th anniversary shortly before his death in 2020. They moved to Phoenix, Arizona in 1953 and raised their two children, daughter Jan Lee Warne (Cacheris) and son James Ernest Warne, III in the Arcadia neighborhood. Their children brought them much fun, travel, Great Danes and pride. Jim and Joan founded Engineers Testing Laboratories, Inc. now known as Western Technologies, Inc., which pioneered geotechnical engineering and related services in Arizona.

After the family business was established, Joan obtained a Masters from Arizona State University and worked as a psychometrist until age 70, helping the local court system evaluate troubled youth. She enjoyed competitive tennis, mountain retreats, ranching, river rafting, and the beach. Joan was extremely fit, exercising with friends daily into her nineties at The Village and Chaparral Park. Joan was a founding member of the Arcadia Neighborhood Homeowner’s Association and active with the Women’s Board of the Arizona Kidney Foundation, the P.E.O. sisterhood, the YMCA, many engineering associations and local politics.

As for Journey’s End, Jim and Joan kept their promise to the previous owners to maintain the tradition of the Merry Christmas sign. Joan hoped the next owners would do the same.

There will be a Celebration of Life for Joan at 2 P.M. on Saturday, December 17, 2022 at Paradise Valley United Methodist Church, 4455 E. Lincoln Drive, Paradise Valley, with a reception to follow. In lieu of flowers, please consider a donation to the Mayo Clinic https://www.mayoclinic.org/giving-to-mayo-clinic. Condolences may be expressed at www.whitneymurphyfuneralhome.com.

Offer Hugs From Home Condolence for the family of WARNE, JOAN ANNE