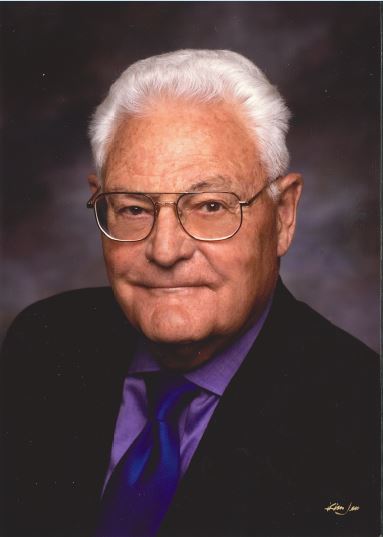 James Ernest Warne, Jr. (Jim) passed away Monday, February 10, 2020 after 93 years of life filled with a passion for making a difference and honoring his beliefs. He will be missed by the many he cherished and helped in life, and he will be remembered for his heartfelt contributions to family, friends, community, profession, and the company he founded, together with its people that he so appreciated. Jim challenged everyone around him to do more and live more fully, but held himself the most accountable for “making it happen” and “doing the right thing.”
Jim was born in Bisbee, Arizona on May 24, 1926, the only child of James Ernest Warne, Sr. and Alice Roosevelt Wilson. He joined the Navy before finishing high school and served in the Amphibious Forces in the Pacific theater during WWII. He earned his GED while serving in the Navy for five years. Courtesy of the GI Bill, Jim attended Arizona State College (later Arizona State University) and the University of New Mexico, where he earned a B.S. and M.S. in Civil Engineering.
While in New Mexico, Jim met Joan Anne Gardner, his wife of 69 years, and they married on January 26, 1951. Jim and Joan moved to Phoenix, Arizona in 1953 and raised their two children, daughter Jan Lee Warne (Cacheris) and son James Ernest Warne, III in the Arcadia neighborhood.
In 1955, Jim and Joan founded Engineers Testing Laboratories, Inc., now known as Western Technologies, Inc. The firm pioneered geotechnical engineering and related construction services in Arizona, and remained the largest consulting engineering company headquartered in Arizona for many years. As an entrepreneur and leader in his profession and community, Jim worked to update building codes, established professional societies, and invented engineering methodologies for the arid Southwest. He was grateful for the opportunity to work hard, rise, and give back. Through his commitment and drive, he changed the trajectory of many people’s lives.
Jim was an Arizona original. He loved Arizona, its genuine people, and rich history. He had a passion for genealogy, which led to many trips to Cornwall, England.
Jim is survived by his wife Joan Anne Gardner, daughter Jan Lee Warne Cacheris (Chris), son James E. Warne, III (Beth); grandchildren Christopher John Warne Cacheris (Amanda), Catherine Jan Warne Cacheris Mayhew (Brad), Craig James Warne Cacheris, and James Farley Warne; and great-granddaughter Beverly Catherine Cacheris.
There will be a Celebration of Life for Jim at 1:00 P.M. on Saturday, February 29, 2020 at Paradise Valley United Methodist Church, 4455 E. Lincoln Drive, Paradise Valley, with a reception to follow. In lieu of flowers, please consider a donation to the Mayo Clinic https://www.mayoclinic.org/giving-to-mayo-clinic or to The Sonntag Spine Center at Barrow Neurological Institute (supportbarrow.org).

Offer Hugs From Home Condolence for the family of WARNE, JR. JAMES ERNEST