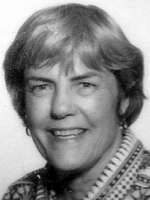 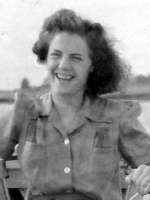 “Kay” was born February 20, 1916 in Pike County, Missouri to Helen Jo Unsell and Virgil Kaser. Grandmother, Kathy Kibler Unsell, taught her to read when she was two. Her father had fallen in love with Arizona during hunting trips in the early 1900s, so the family began to take excursions out West. Each winter from 1928, Kay’s family came to Phoenix and rented homes downtown, where she and her brother, Gene, attended school at Emerson, Kenilworth, Capitol, and Phoenix Union. Kay’s family lived at “Gypsy Hill Farm,” the old family place near Frankford, Missouri. Kay and her brother Gene rode horses and collected fireflies in a jar. When she was five, she climbed to the top of the farm water tower. At their cabin on the steam railroad lake at Baring, they swam, spun off the water wheel, rowed a boat, and played cards. Kay attended Phoenix College, graduating in 1936. At the time, Phoenix College shared a campus with Phoenix Union. Upon graduation, Kay and her big steamer trunk rode the train to Mills College, Oakland, California, just a ferry ride from cosmopolitan San Francisco. What excitement for a farm girl! Her kids benefitted greatly over the years from Kay’s exposure to San Francisco’s fine dining! Kay was an adventurous cook and early fan of Julia Child. Kay received a B.A. in Language and Literature from Mills College (1938) and later studied Russian, Greek, and Mandarin. In college, Kay’s pilot friends flew her over the Bay Area. She married Allyn Watkins in 1940. During World War II, she worked as a secretary and translator at the draft board in Douglas, Arizona. In 1959 Kay and Allyn took their children by car from Phoenix to Panama, a trip made more exciting when they became marooned in Honduras during a revolution. Kay loved to explore and traveled to most of the continents, even to Mao’s China. Truly one of the Founding Mothers of Modern Phoenix, Kay was a volunteer and officer in these organizations: Planned Parenthood, PEO, PTA, World Affairs Council, U.S.-China People’s Friendship Association, American Association of University Women, Mills College Alumni Association, Phoenix College Alumni Association, Kachina Women’s Club, Phoenix Women’s Club, Phoenix Art Museum, and Trinity Cathedral. She and the family were always big animal lovers and rescued many birds, cats, dogs, snakes, and even a skunk named Florabelle. Kay joined her loved ones on May 11, 2012: her second husband, Howard Jenkins, her parents, Virgil and Helen Kaser; her brother, Gene C. Kaser, her grandson, Justin Brock, and her former husband, Allyn Watkins. She is survived by her children, Linda Brock (Jeffrey Heimer), Larry (Suzi Cable), Lucia Perry (Jim), Lisa Watkins; grandchildren: Jim and Jason Brock, Christopher Watkins, Sarah Perry McWilliams, Julia and Kathryn Perry; great grandchildren, Loren and Olivia Brock, William McIntyre, and Gwyneth McWilliams; nephews, Eric (Suzy) and Alvin Kaser, and niece Phyllis (Steve) Gustafson. Memorial Service will be held at 10:30 A.M. Monday, June 4th, at Trinity Cathedral, 100 W. Roosevelt St., Phoenix. In lieu of flowers, donations may be given to Hospice of the Valley or a Humane Society of your
choice.