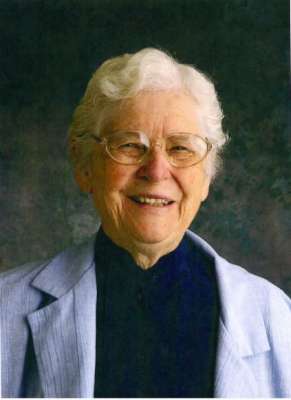 Sister Frances Margaret Webster (Mary Leo), RSM – of Phoenix, AZ, passed away Monday, September 14, 2015 at the age of 90. Born on a farm outside of Phoenix, Frances Margaret was the youngest of the four daughters of Arthur Webster and Minnie White Webster. She attended St. Mary’s Grammar School and High School in Phoenix and completed a year at Arizona State University, then entered the nursing program at St. Joseph’s Hospital in Phoenix. Before completing her training, Frances Margaret entered the Sisters of Mercy in Burlingame California, receiving the religious name Sister Mary Leo. She professed vows in 1949 and began eighteen years of ministry as nursing supervisor at St. Mary’s Hospital, San Francisco; Mercy Hospital, Bakersfield; St. John’s Hospital; Oxnard, Mercy Hospital, San Diego; and St. Joseph’s Hospital, Phoenix. In 1967 Sister attended Arizona State University, receiving a B.S. in sociology in 1969 and an M.S.W. in social work in 1971. For the next few years she ministered in social services and discharge planning at the Bakersfield and San Diego Hospitals. She returned to Mercy Hospital in Bakersfield in 1980 and for the next decade directed the hospital’s Mercy Southeast Services, an outreach program for low income families, and also served as Director of Health Services for Bakersfield Catholic Charities. In 1991 Sister Frances transferred to the Social Service Department at St. Joseph’s Hospital in Phoenix where she remained until her retirement in 1995. Visits to the Grand Canyon and Rocky Point with her sister, Barbara, and best friend, Dr. Mary Magee, were visits she treasured. Always a consummate gardener, her friends and family looked forward to the bounty from her gardens wherever she lived and the delicious food she produced. She continued to volunteer at the hospital, while enjoying time with her family. In 2011 Sister moved to the sisters’ retirement home in Burlingame. She spent her last months at Huger Mercy Living Center in Phoenix. She is survived by her sister, Barbara Piano, several nieces, nephews and their families, and her loving community of the Sisters of Mercy. Sister Frances will be remembered not only for her steady, unruffled manner, quiet sense of humor, sensitivity to others and experience in helping them in their need, but also as a gentle person who loved her family, loved her Mercy community, and loved the Arizona desert.  The Vigil Service and Mass of Resurrection was celebrated on Saturday, September 19, 2015 at Huger Mercy Living Center, 2345 W. Orangewood Avenue, Phoenix, Arizona, 602-406-5600. The Vigil began at 10:00am followed by a Mass at 11:00am. Burial took place at St. Francis Cemetery. Memorial gifts may be made to the Sisters of Mercy, 2300 Adeline Drive, Burlingame, CA 94010.