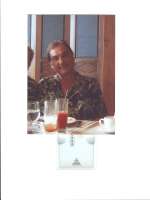 50, of Phoenix, AZ, died October 11, 2010. He was preceded in death by his dear friend and companion, Jim Grucky. He is
survived by his mother, Adolene, his sister Roxane, his nieces Lisa and Kristen, his nephew Adam and his great nephew Jayden.
Phil was a wonderful, caring person, who was always there for everyone. He was the rock in many people lives. Family and friends considered him their Uncle and loved him dearly. He left his mark on many people and will be missed dearly. Phil began his nursing journey at MIHS in 1992 as an LPN on the med-surg oncology unit. During his career he enjoyed a variety of positions throughout the hospital eventually leading to his position as manager of critical care services. He was a caring and dedicated nurse, caring not only for his patients, but his co-workers. We have only to look around ourselves to see the lives that he has touched and the compassion that he shared. We will all share in his loss, but we will remember him with laughter and many fond, loving memories. A Memorial Mass will be held at St. Francis Xavier Catholic Church, 4715 N Central Ave, Phx, AZ at 9:30am, Saturday, October 16, 2010. Arrangements entrusted to Whitney & Murphy Funeral Home. Donations can be made to your favorite charity.

Offer Hugs From Home Condolence for the family of WEDZIK, PHIL JOSEPH