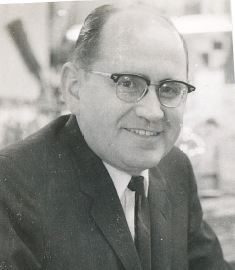 Charles Weidler, 95, passed away peacefully surrounded by his family on March 20, 2019.
Charles was born August 25, 1923 in Bowling Green, MO and moved to Phoenix in 1925. He attended Phoenix Union High School and met Audrey Scheid who he married on May 10, 1942.
Charles served in the Army 96th Infantry Division and fought in the Battle of Leyte. He also fought in Okinawa, the last battle of World War II, where he earned a Purple Heart and the Silver Star.
After the War, Charles resumed his career in finance with Cooper Weidler Acceptance. With the help of his wife Audrey, his business grew into a successful company.
Charles was active in St. Gregory’s and Blessed Sacrament Parishes in the Diocese of Phoenix. He was a Boy Scout Leader, member of Toastmasters and the Phoenix Catholic Cemetery Board.
Charles and Audrey enjoyed traveling with friends, especially trips when he flew his own plane.
Charles was preceded in death by his son Kenneth, granddaughter Erin and grandson Kevin.
He is survived by his wife Audrey of 76 years, his son Donald Weidler, daughters Penny Cahill, Barbara Grinstead, Gerry Smith (Dave), fourteen grandchildren and forty-one great-grandchildren.
Visitation will be on Thursday, March 28, 2019 from 6:00 P.M. – 7:00 P.M. with a Rosary at 7:00 P.M. at Whitney & Murphy Funeral Home, 4800 East Indian School Road, Phoenix. Funeral Mass will be on Friday, March 29, 2019 at 10:00 A.M. at Blessed Sacrament Catholic Church, 11300 N 64th St, Scottsdale.

Offer Hugs From Home Condolence for the family of WEIDLER, CHARLES