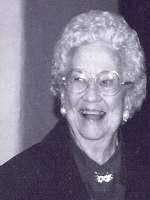 a 55 year resident of Phoenix and subsequently Peoria passed away on Monday November 30, 2009. Ruth was born April 17, 1919 in Los Angeles, CA. She was a graduate of Immaculate Heart College in Los Angeles. Having moved to the Valley of the Sun in 1954 with her husband Gene and two boys, Ruth became a well known and active citizen of Phoenix. A member of the Kachina Woman’s Club and Phoenix Country Club for many years she most enjoyed and identified with her association with Brophy College Prep. Ruth’s association with Brophy spans a 35 year career where she was President of the Mother’s Guild, Chairwoman of the Annual Dinner Dance and served as Secretary to the President(s) of Brophy. The Jesuit Community at Brophy was her second family that she loved so much. Ruth was predeceased by her husband of 61 years F.E. (Gene) Whitcher. Ruth is survived by two sons, Bill of Surprise Arizona and Bob of Stratford, Connecticut and her sister Lois Pierson of Studio City, CA. In addition Ruth had five grandchildren and six great-grandchildren. A Mass of Remembrance of Ruth’s life will be celebrated on Friday December 11, 2009 at 1:30 PM in the Brophy College Prep Chapel. In lieu of flowers donations may be made to the Gene & Ruth Whitcher Scholarship Fund at Brophy College Prep 4701 N. Central Avenue, Phoenix, Arizona 85012.

Offer Hugs From Home Condolence for the family of WHITCHER, RUTH