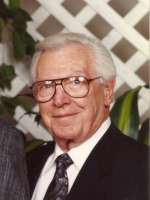 of Phoenix, Arizona was born on October 18, 1916 in Lake Forest, Illinois and passed away on September 5, 2010 in Tempe, Arizona. Herbert was preceded in death by his wife of 55 years, Harryet H. White, his brother William J. White, his niece Annie Plahm, and his nephew William Plahm. His daughter, Betsy White Anderson and his granddaughter, Allison Anderson, both of Phoenix, survive him. His sisters, Priscilla Plahm and Joanne Bruce, and his nieces and nephews Janet Plahm Lucas, Kurt Bruce, Carrie Bruce Miller, Donald Bruce, Kathleen Bruce Azato, Robert, Richard, James, and David White also survive him. Herbert completed master’s degrees in both business administration and public administration at Roosevelt University of Chicago. In 1943, Herbert enlisted in the Army Air Force serving in both North Africa and Italy during the Second World War. Following WWII, he served with the occupation forces in Japan. Herbert retired from the military in 1963 with the rank of Lieutenant Colonel, but continued to work with the military in a civilian capacity until 1973, and later served as Dean of Park College at Williams Air Force Base. Herb’s community service included the Lake Bluff (IL) Park Commission; Girl Scouts of Illinois-Crossroads Council; Tempe Historical Museum; and Christ Church of the Ascension. He was a member of the Freemasons, the University Club, the National Active and Retired Federal Employees (NARFE), and the Dons’ Club of Arizona. A private service for the family was held at Christ Church of the Ascension. Donations to the memory of Herbert White would be gratefully accepted by either of the following organizations: NARFE-Chapter 1505-Alzheimer’s Research, Alzheimer’s Association, 225 N. Michigan Avenue, 17th Floor, Chicago, IL 60601 or Arizona Animal Welfare League and SPCA, 30 N. 40th Place, Phoenix, AZ 85034

Offer Hugs From Home Condolence for the family of WHITE, HERBERT F