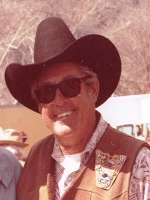 retired financial V.P. of The Tanner Companies and former Director, Registrar of Contractors, State of Arizona passed away peacefully on April 26, 2010 at age 87 with his wife by his side at home in Phoenix, Arizona. John was a beloved husband, brother, uncle, brother-in-law and friend. He is survived by his loving wife of 43 years, Marion Nancy White, sisters: Cherrel Willis, Sharon Smith (Clair), brother: Charles Clair White (Jean), nephews: Brent, Greg, Rusty and Larry White, Jerry Willis, Gary White, Tim and Eric Smith. Nieces: Pat Woolsey, Cindy Whatley, Sheri Dogra, Lisa Verguson, Jodi Maki, Vicki White, Judy Blair, Lisa Smith, Stephanie DelGrosso, Laura Rawlings and Lisa Hummel. John was born in Mesa, AZ on September 25, l922 and grew up in Fort Apache, AZ attending schools in Snowflake and living most of his life in Mesa, Payson and Phoenix. After serving six years in the U.S Navy, enduring many battles in the South Pacific and aboard the USS Enterprise in Pearl Harbor on December 7, 1941, he returned home to Arizona and joined The Tanner Companies where he remained for 33 years. After retirement from The Tanner Companies he and his brothers bought the Cross V Cattle Ranch in Payson, AZ. After the ranch was sold he was appointed in 1987 as Registrar for the State of Arizona. He was an avid horseman and enjoyed many strenuous trail rides as well as roping, and showing and selling his registered quarter horses. Trout fishing in his beloved White Mountains was also his passion. He and Marion loved to go out to dinner on Saturday nights and dance the night away. He was an honest, kind, generous, and wonderful man and will be deeply and sorely missed by his family and friends and little dog, CeCe. He was a member of the Associated General Contractors of Arizona, Board of Directors of The Tanner Companies, and Honorary member of Mesa Southside Sheriff’s Posse, American Quarter Horse Association and Verde Vaqueros. A Memorial Service for family and friends will be held at 11:00 am on Saturday, May 1, 2010 at the LDS Church, Granite Reef Ward at 3010 E. Thunderbird Road in Phoenix. The family wishes to thank Premier Hospice for their excellent continuous care of this good man. Arrangements entrusted to Whitney & Murphy Funeral Home

Offer Hugs From Home Condolence for the family of WHITE, JOHN