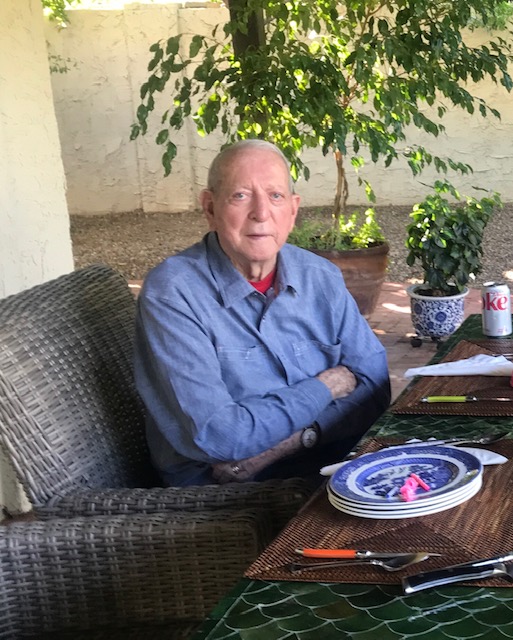 It is with deep sorrow that we announce the death of William (“Bill”, “Junior”) Russell White, Jr., who passed away at home in Scottsdale, Arizona on January 17, 2023 at the age of 90. Longtime residents of Northern Virginia, he and his wife, Rosette, moved to Scottsdale two years ago.

He was born in Colfax Township in Rutherford County, NC, on June 6, 1932 to William Russell White (Sr.) and Nettie Belle Piercy. His grandparents were George Washington White, Sarah Toney White, Hattie Piercy and James Columbus “Lum” Piercy. Among other fond memories of his youth in Cherryville, he recounted working at the historic landmark Lester Theatre in Cherryville, where he manned the concession stand and developed a camaraderie with the projectionist, exchanging cold beverages for watching movies from the projection booth in the middle of summer. At 16 years old, he was a given the opportunity of a lifetime to try out for the Boston Red Sox, as he had a strong arm. It was an experience he would never forget. A veteran of the military, he then built a lifelong career in the U.S. State Department, which took him and his family all over the world. Upon retirement, he held the position of Deputy Director of the Executive Management Staff, Asia and the Near East/EMS for the USAID in Washington, DC.

Bill White was predeceased by his cherished sisters Rosie Mae Sellers and Ruth Leonhardt of Cherryville, his brother Reeves White of Taylorsville, and an infant brother and sister.

His wife, children and grandchildren are planning to get together in Scottsdale in June for a celebration of his life.

Offer Hugs From Home Condolence for the family of WHITE, JR., WILLIAM RUSSELL