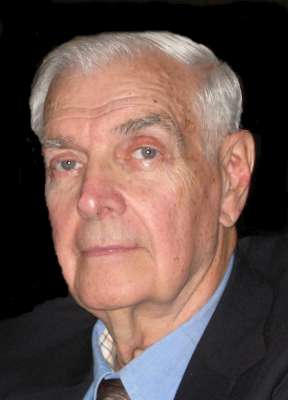 Frank Burton “Burt” Whitman, Jr, 85, of Gilbert, AZ, formerly of Bloomington, passed away peacefully October 30, 2014, at Chandler, AZ, after a recent illness. Services will be arranged at a later time. Burt was born Jan. 10, 1929, in Normal, IL, attended Normal Community High School and Illinois Wesleyan University before marrying Mary Katherine “Katie” O’Rourke on May 29, 1950. He was a fixture at Rose Sporting Goods for over thirty years while he and Katie raised their four girls and three boys. Their Bloomington house was a second home to many of the friends of the Whitman siblings.   They moved to Phoenix, AZ in the mid-eighties where Burt became known as the “wood guy” at the Payless Cashways in Gilbert, AZ. He would awe the customers with his talent, producing works of art with his scroll saw and a block of wood. Many a friend and family member has a cherished piece of Burt’s art. He was the number one fan of his children, grandchildren and great-grandchildren, attending numerous games, meets, and recitals over the years, encouraging them in their pursuits and interests. An avid sports fan to the end, he was a gifted athlete (baseball, basketball, football and golf). He loved volunteering at the Phoenix Open to be close to the action. Burt was in heaven with his sports package on cable TV so he could always find a game or match to watch. Burt is survived by his children, Ann (Jim) Brandt, David (Peggy) Whitman, Mary Lou (Jack) Lungerich, Kathy (Bob) Waropay, John (Brenda) Whitman and Jane Whitman; daughter-in-law, Colleen; 15 grandchildren; and 15 great-grandchildren. He is preceded in death by his wife, Katie and youngest son, Bob “Boo.” In lieu of flowers, donations in memory of Frank Burton Whitman, Jr. may be made to Illinois Wesleyan University at Illinois Wesleyan University, Attn: Advancement Office, P.O. Box 2900, Bloomington, IL 61702-2900.