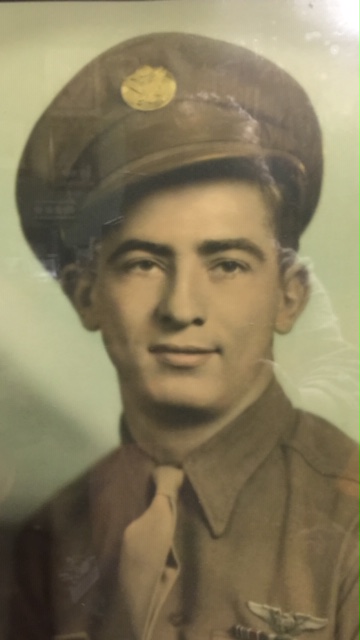 Thomas Joseph Wich, age 95, passed away peacefully at home, on Saturday, February 16, 2019. Tom was born on March 26, 1923 to Margaret Smith Wich, and Michael Francis Wich, Jr. of Phoenix, Arizona where he lived most of his life. He attended St. Mary’s Catholic School. He was the husband of the late Betty Reuter, Fern Johnson and Suzanne Wich. He was also preceded in death by two children, Nancy Pritt (2001) and Joseph Wayne Wich (2016). He is survived by three children, son Bob Reuter and wife Jessica of Payson, Arizona, daughter Dianna Leighton of Huntington Beach, California and daughter Tammy Ketcher and husband Kyle of Farmington, Arkansas. He also leaves behind seven grandchildren and eight great-grandchildren. He also leaves behind numerous nieces and nephews of which he dearly loved.
Tom is a veteran of World War II, where he earned several medals, including the European-African Middle Eastern Campaign Medal with (4) Bronze stars, the Good Conduct Medal, Air Medal with (3) Oak Leaf Clusters, and the Distinguished Flying Cross. He was also awarded other medals and a Presidential Unit Citation for extraordinary heroism in action during WWII. He served with the US Eighth Army Air Forces at Thorpe Abbotts Air Field in Norfolk, England.
During the war, he was a tail-gunner on a B-17 bomber, named “Heaven Can Wait”, where he participated in (29) missions over Berlin, Hamburg, Paris and Munich. His successful bomb raids included enemy installations, bridges and industrialized zones. He belonged to the Bloody Hundredth Bomb Group of which was the most famous heavy bomb group of WWII. He also flew (2) missions on “D-Day” over southern France participating in the bombing of enemy installations and in providing coverage for American ground forces. Flying in one of the key spots for the defense of his Fortress, he participated in both tactical and strategic assaults against German strength on the continent of Europe, hitting the enemy’s communications and transportation systems near the front lines of Normandy, and factories far inside the Third Reich which made German weapons of war.
He was also awarded club certificate to the “Lucky Bastard Club”, this was popular with the Army Air Corps in WWII. Upon reaching (25) completed missions a person was crowned the honor of being called a Lucky Bastard, which survived (25) missions over Europe. He ended his service in 1944 as S/SGT Thomas J. Wich and returned to Phoenix, Arizona.
His career after the war entailed 40+ years of truck driving. He worked with various transportation companies including local and long-haul truck driving. During his career, he never had an accident and was awarded numerous safety citations and awards. He retired in 1985 to spend time with family, fishing, traveling the US and enjoyed his Arizona Diamondback baseball games.
During his last (5) years, he was graced and loved by Life’s Blessings Assisted Living Home in Phoenix, Arizona, where Tom was a Life’s Blessing to all that met him. He was everyone’s Uncle or Dad. Life’s Blessings gave Tom his independence with grace, love and respect that he richly deserved, and was the most lovable and humble man anyone wanted to meet. His humor was comical but loving, his beautiful eyes would light up a room, and always saw the good in everyone. He will be deeply missed by his family, his friends and all who met him.
Graveside Service with full Military Honors will be held on Monday, March 11, 2019 at 10:00 A.M., at the Fayetteville National Memorial Cemetery, in Arkansas. A Funeral Mass will be celebrated at a later date in Phoenix, Arizona.
Condolences may be expressed at www.whitneymurphyfuneralhome.com

Offer Hugs From Home Condolence for the family of WICH, THOMAS JOSEPH