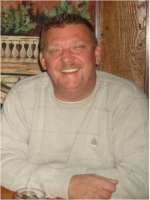 Born December 5, 1959, Bruce
Willey took his final ride on December 12, 2010, at the age of 51. He was born in Pueblo, Colorado to Don Willey and Charlotte Rapillo. He fondly remembered the years he spent with Albert Neil (Gramps) and Hope Willey, his paternal grand–parents and frequently spoke of the deep love he had for his wife, Deb Willey and his Harley Davidson motorcycle. It will be debated for years which he loved more! Bruce is survived by his wife Deb; child Christine; grandson Matthew; his mother Charlotte; his grandmother Louise; his siblings: Robin, Maria, Shawn, Theresa and Tiffany; and numerous aunts, uncles, nieces and nephews. Bruce was preceded into rest by his son Mark Biderman and father Don Willey. A Memorial Service will be held at Palmcroft Baptist Church, 15825 N. 35th Ave., J Bldg, Phoenix, AZ 85053 on Saturday, December 18th at 11:00 AM. In lieu of flowers, family suggests donations be made to your favorite charity.

Offer Hugs From Home Condolence for the family of WILLEY, BRUCE