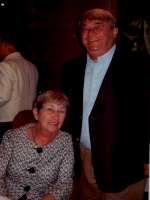 Age 76, died peacefully with his wife at his side, under the care of Hospice of the Valley, on Tuesday, April 16.  In 1956 he came from Sleepy Eye, MN to ASU where he met his wife, Rita.  After graduation, he served for two years in the Army at Nike Missile sites in the Chicago area and then returned to Phoenix continuing to serve in the Army Reserve.  When computers were first initiated, he began computerizing accounting systems for several small companies.  He was a member of Phi Kappa and the Knights of Columbus.  He and his wife were avid world travelers.  He is survived by his wife of 53 years, Rita, two daughters, Amy Chapman (Carl), Carrie Bagby (Rob) and the “light of his life”, grandson, Jack Bagby (age 6), brother, Lynn (Jean) and several nieces and nephews.  He fought a long and valiant battle with many medical problems over the last several years and is now at peace in his heavenly home.  Visitation will be on Thursday, April 18 from 6-8pm with a Rosary at 7pm at Whitney & Murphy Funeral Home, 4800 E. Indian School Road, Phoenix.  Funeral Mass will be on Friday, April 19 at 9am at St. Mary’s Basilica, 231 North 3rd Street, Phoenix.  Interment will follow at St. Francis Catholic Cemetery, 2033 N. 48th Street, Phoenix.  In lieu of flowers, the family requests donations to Hospice of the Valley, 1510 E. Flower Street, Phoenix, AZ 85014-5656, Mayo Clinic Hospital, 5777 E. Mayo Blvd., Phoenix, AZ 85054 or to your favorite charity.

Offer Hugs From Home Condolence for the family of WILLHITE, DUANE