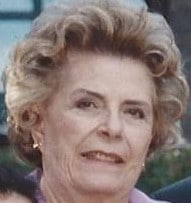 On May 7, 2021, the angels came to escort our precious mother home to Heaven. Joan Kilkenny Williamson was born on February 6, 1932, in Cleveland, Ohio, the daughter of Hilary and Gladys Kilkenny. She subsequently grew up in Santa Ana, California and Yuma, Arizona, eventually settling down in Phoenix. In 1950, she married the true and only love of her life, James Robert Williamson. Together they had two daughters who they nurtured and loved and helped set an example of what a loving and lasting marriage should look like. In 1983, our father died at a too-young age of 53 leaving our mother a young widow. Being the accomplished woman that she was, she forged a productive life by continuing to work until the age of 76 as a highly respected school psychologist for several school districts in the Phoenix area. She was admired, respected, and loved by all those who worked with her. Her intelligence, empathy, and gentle spirit guided her path forward as she touched so many lives in such a positive way.
She and her beloved sister, Elinor Kilkenny Kniffin, also a school psychologist and young widow used their summers to travel all over the world. The Kilkenny sisters embraced life, adding color and texture to everything they did. The two of them were exemplary role models for their children and those fortunate enough to cross their paths. In April of 2021, our dear aunt was called to her heavenly home. Our mother missed her terribly but understood that she too, would be joining her and our father very shortly. In true Kilkenny sister fashion, she passed 33 days after our aunt.
Our mother is survived by her daughters, Kathleen (Michael) Kasun, Deborah (John) Michael, two grandsons, Sean (Tawny) Kasun, and Scott Kasun. In addition, she leaves behind her beloved nieces, Hilary (Rick) Arleth, Sharon (Dana) Filippi, and nephew Rick (Kelly) Kniffin. She will be missed by her many friends at the different school districts and at Montecito Assisted Living, her home for the past four years. Private services are planned in San Diego, California. A Celebration of Life will be scheduled in Phoenix sometime this summer. Condolences may be expressed at www.whitneymurphyfuneralhome.com

Offer Hugs From Home Condolence for the family of WILLIAMSON, JOAN KILKENNY