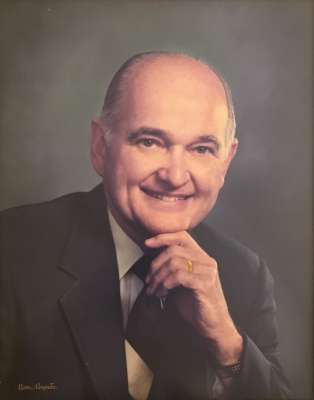 Dr. Jack Wilson passed away peacefully on July 1, 2017, surrounded by his loving family. Jack was a beloved husband, father, grandfather, great-grandfather and loving friend to all. He was born in Colorado Springs, Colorado on September 5, 1928, to Cherrill and Freda Wilson and grew up in Henryetta, Oklahoma. He graduated from the University of Oklahoma in 1950 where he was a member of the Air Force ROTC and was commissioned a Second Lieutenant upon graduation. His professional journey began at George Washington School of Medicine followed by a rotating internship at Tripler General Hospital in Honolulu, Hawaii. Jack was a Flight Surgeon and Chief of OB-GYN at Hunter Air Force Base in Savannah, Georgia and completed residency in OB-GYN and Cytology at Walter Reed Hospital in Washington D.C. During this time, he was also a White House Assistant Physician and then went on to serve at Davis Monthan Air Force Base in Tucson, Arizona. He applied for commission in the US Navy and returned as a Naval Captain. He retired after 38 years of service to our Country. He entered private practice in Phoenix in 1963 until his retirement in July, 1992. He was a teaching surgeon at Good Samaritan Hospital while serving on numerous civic and medical boards. Jack had an engaging personality and great sense of humor. He would most like to be remembered for the life he embraced. He loved to engage others in conversation and never met a stranger. Through his love of conversation, he came to know of a patient’s daughter-in-law who had become a widow with four young children. He asked to meet her and immediately Jack and Pat had a sparkle in their eyes and love in their hearts. Jack Wilson and Pat Sebald joined families on June 29, 1979. After raising his five children; Kathie Borst, Jim Wilson(Nancy), Susan Pardue, Tom Wilson and Sharon Ewing (Marty); he lovingly accepted the responsibility to raise another family; Stephanie Compton (Shaun), Laura Calderon (Luis), Mary Sebald (John Gransbery) and John Sebald (Brigette). Through the blended family, he was blessed with 21 grand-children and 2 great-grandchildren. He had a joy of life, a smile than never ended and a heart that was always giving. Jack was a man of strong faith, high moral character and a sincere empathy for his fellow man. Always a role model for his family, he generously provided guidance that “if you can imagine it, you can achieve it, if you dream it, you can become it.” He cherished bringing hundreds of babies into the world with the patients he loved and with the respect of his peers. Jack and Pat loved to travel abroad and domestically throughout their 38 plus years together. He treasured a special calling as a Knight in The Order of Malta caring for the homeless, sick and poor. From a very young age, Jack had a true love of music with a beautiful bass voice and always had music playing. Jack became ill by contracting West Nile Virus in October, 2008. As heartbreaking as his illness was, he knew he was loved and returned that love with a contagious smile every day. His beloved dog, Lucky provided him much love and companionship. Jack and Pat cherished each day they were able to spend together. The family wants to thank the Foundation for Senior Living (Men’s Club as he affectionately called it). A Memorial Mass will be celebrated at St. Theresa Catholic Church, 5045 E. Thomas Road, Phoenix, on Tuesday, July 11, 2017, at 10:00am. Jack cherished the words “I love you”. He would be honored if you pay this love forward. If you have an opportunity to love someone and change their lives please do so in Jack’s memory. The family suggests that expressions of sympathy be in the form of contributions to the Foundation for Senior Living, 1201 E. Thomas Rd, Phoenix, AZ 85014 or Crosier Fathers and Brothers, 2617 E. Campbell Ave., Phoenix, AZ 85016.

Offer Hugs From Home Condolence for the family of WILSON, JACK H. M.D.