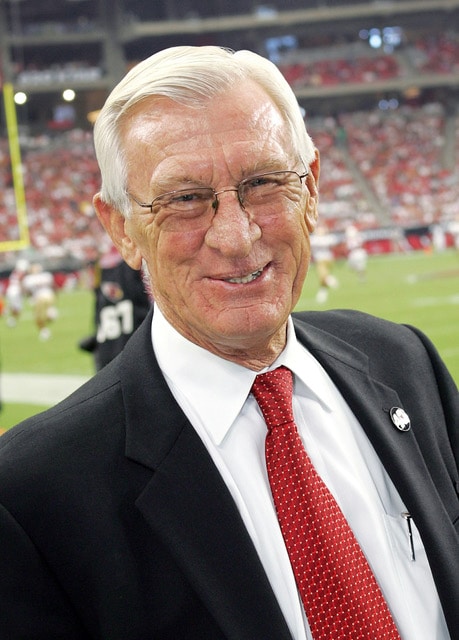 Larry Frank Wilson passed away at his Scottsdale, AZ home on September 17 at the age of 82.

A legendary figure in NFL history, Wilson built a Hall of Fame career as a tenacious defender for 13 seasons before serving 30 years in the Cardinals front office. His on-field persona as an aggressive, ferocious player who re-defined the safety position stood in stark contrast to the gentle, caring and compassionate demeanor he always exuded off of it.

After graduating from Rigby High School in Idaho in 1956, Wilson went on to star at the University of Utah as a two-way starter, playing halfback and cornerback for the Utes. His four-decade association with the Cardinals began in 1960 when he was selected by the organization in the seventh round of the NFL Draft.

Originally a halfback, the 6-0, 190-pound Wilson was in danger of not making the team as a rookie. However, a switch to safety prior to the final preseason game earned him a spot on the roster, beginning a career that would revolutionize his position with his signature toughness and versatility.

More significant than the statistics was the aggressive style of play made famous by Wilson, who popularized the safety blitz, then known as the “Wildcat” in honor of his nickname. His reputation as one of the toughest players in NFL history was cemented in a 1965 game vs. the Pittsburgh Steelers when he played with casts on both hands and intercepted a pass to set-up the game-winning touchdown.

A member of the Pro Football Hall of Fame’s class of 1978, Wilson was also inducted into the Cardinals Ring of Honor at State Farm Stadium in 2006. His number eight is one of just five retired jersey numbers by the Cardinals. Still regarded as one of the best to ever play his position, Wilson was named to both the NFL’s 75th and 100th Anniversary teams.

Following his playing days, Wilson embarked upon a 30-year career as a team executive with the Cardinals. He worked as the team’s director of pro scouting (1973-76), director of pro personnel (1977-78) and served as interim head coach for the final three games of the 1979 season, earning two victories.

Wilson was appointed to Vice President and General Manager with the team during the Cardinals inaugural season in Arizona in 1988, a position he served through 1993. He continued his role as the team’s Vice President until his retirement in 2003. As a Cardinals executive, Wilson was instrumental in the launch of Cardinals Charities, a foundation dedicated to helping women, children and minorities in Arizona. That was consistent with an unwavering desire to help others that Wilson demonstrated throughout his life. When fans in St. Louis raised $80,000 to commission a statue of him outside Busch Stadium, Wilson insisted the funds instead go to the city’s Children’s Hospital. It was a special place to Larry, as his son Jed suffered from a congenital spinal defect that required approximately 20 surgeries throughout his life before passing at age 25 in 1986.

An avid fisherman and outdoorsman growing up in Idaho, Wilson was a passionate golfer and woodworker in his post-playing career.

Wilson was born on March 24, 1938 in Rigby, Idaho. He is survived by Nancy, his wife of 40 years, as well as daughter Christie (Stephen) Prosperi and son Larry (Katherine) Wilson Jr. He is also survived by seven grandchildren – Kelsee and Jaci Wilson, Grady Wilson, Hannah (Jeffrey) Moore, Emily (Scott) Sedlak, Joseph (Jessica) Prosperi and Bryan Prosperi – and one great-grandson, Oliver Moore.

A service will be held at 10:00 am on Tuesday October 6th at Bonhomme Presbyterian Church in Chesterfield, MO. Due to Covid restrictions, seating is limited. A private interment will follow at Bellefontaine Cemetery.

Offer Hugs From Home Condolence for the family of WILSON, LARRY FRANK