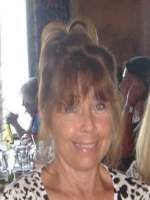 Pamela S. Wilson, beloved wife and mother, passed away March 30, 2012 surrounded by her husband and son. “Pam” was born March 24, 1955, in Phoenix, Arizona and has lived here all her life. She was currently employed at US Airways. She is survived by her husband of more than 30 years, David G. Wilson, her son Austin D. Wilson, her sister, Mary Eason, nephew Michael Eason, niece, Carrie Zive and twin daughters of Carrie. She was a lover of people and will be greatly missed. She will remain in our hearts forever. Visitation will be from 5:30-8:30pm, Wednesday, April 4th at Whitney & Murphy Funeral Home, 4800 E. Indian School Road, Phoenix, and a Funeral Service at 1:00pm, Thursday, April 5th also at Whitney & Murphy Funeral Home. Interment will follow at Phoenix Memorial Park, 200 W. Beardsley, Phoenix.

Offer Hugs From Home Condolence for the family of WILSON, PAMELA S.