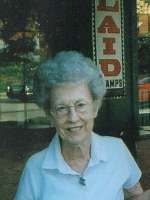 91, passed away Sunday December 5, 2010 in Phoenix, AZ.
Pauline was born on November 23, 1919 in Independence MO.
to William W. Wilson I and Naomi Paxton Wilson. Pauline graduated from William Chrisman High School in Independence MO. in 1937 as a member of the National Honor Society. She continued her education at Gregg College of Commerce in Kansas City, MO. And in 1940 was the Missouri State Champion Typist. She subsequently attended Phoenix College and became a Certified Professional Secretary. In 1937 Pauline was employed by the Hallmark Greeting Card Co. in Kansas City, MO., the following year she began her career as a secretary for the Presiding Bishop at the World Headquarters of the Reorganized Church of Jesus Christ of Latter Day Saints, not to be confused with the Mormon Church. Moving to Phoenix in 1946 she began working for the Fannin Gas and Equipment Co., which merged with Suburban Gas Company in 1958. Pauline moved to the Arizona State Capitol, as secretary to the newly elected Governor, Paul Fannin, she remained his secretary until 1965 when Governor Fannin was elected to the United States Senate. It was during that same year that she went to work as the Corporate Secretary for Mardian Construction Company. During her years at Mardian the company built Terminal 3 at Sky Harbor as well as Sun Devil Stadium at ASU along with other major landmarks. Dan Mardian, Sr. was President of the Sun Angeles for many years and Pauline became an avid Sun Devil fan. She retired from Mardian Construction Company in 1987, but remained personal secretary to both Dan and Sam Mardian, until they retired a little more than a decade ago.
Pauline attended the First Free Methodist church down town
in 1947. In 1952 Pauline and her family contributed to and supported the building of the Free Methodist Light and Life Church on 18th Avenue and Fairmount in Phoenix, where she faithfully worshiped. Pre-deceased by her parents and a brother, William W. Wilson II. She is survived by her brother: Charley Wilson, Phoenix, nieces: Virginia Ann Wilson Dennison, MO, Patricia Wilson Benschoter, KS, Carol Wilson Finzoll, MO, and Nancy Wilson Yoder of Phoenix and Wichita, KS and their spouses, nephews: William W. Wilson III, CA. Ernie Wilson and Michael Winn, Scottsdale and their spouses, 4 great-nephews and 7 great-nieces. Pauline is dearly loved by many friends and family and will be missed by all. Funeral Service Saturday, December 11th, 10:00am at the Light and Life Church, 4002 N. 18th Avenue, Phoenix, AZ.
Services entrusted to Whitney & Murphy Funeral Home and Post Scripts by Posey.

Offer Hugs From Home Condolence for the family of WILSON, PaULINE FRANCES