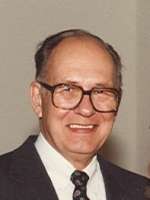 Warren Evans Wilson died on October 12, 2009. Warren was born May 10, 1928, in Northfield, Minnesota. He was one of three children of Northfield’s town physician, Dr. Warren E. Wilson, and his wife, Myrtle Nolan Wilson. His sister Margie died in 2002, and his sister Kina was with Warren during his final days. Warren’s beloved wife of more than 50 years, R. Anne (Fliegel) Wilson died in 2005. Warren and Anne raised three children; Margaret (Phoenix, AZ); Warren (Seattle, WA); and Steve (Mendota Heights, MN). They were extremely proud of their children and of their six grandchildren: Danny, Callie, Ethan, Claire, Jacob and Evan. Warren grew up in the college town of Northfield in a home that promoted culture, education, leadership and adventure. Like both his parents, he was a graduate of Carleton College (Class of 1950). Later he served in the U.S. Army during the Korean War. Warren and Anne raised their family primarily in Neenah, Wisconsin, where they moved in 1962. In this small town, much like the one where Warren grew up, he and Anne took active leadership roles. Warren crafted a career as an industrial engineer and ultimately served as Vice President of Neenah Foundry Company. He retired from the Foundry in 1991 with over 25 years of service. Warren served on and was President of the Neenah Joint School District Board for six years, from 1972 through 1978. He was an ordained Deacon of First Presbyterian Church. He served in numerous community organizations, including the Rotary Club. Throughout his life, Warren had many and varied interests, which he pursued with precise attention to detail. He was an adventurer and loved the outdoors, especially mountain hiking. He enjoyed boating and photography was an avid reader, and his detective work in genealogy will enlighten his descendents for generations.
Warren’s passion for music touched many. He played the clarinet, had his own jazz band in college, and played with the community band in Neenah. He served as president of the Fox Valley Symphony. He communicated that passion to his children and grandchildren. At the service held in Phoenix to celebrate Warren’s life, his grandson Ethan played a rousing rendition of Warren’s favorite,‘When the Saints Come Marching In’, backed by a Dixieland band, that had many of us misty-eyed. We know Warren was watching and was proud to see one of his strongest passions living on through his family.
The family requests that any donations in Warren’s name be made either to Carleton College, Stewardship Office, 1 North College Street, Northfield, MN 55057, or to Hospice of the Valley, 1510 E. Flower Street, Phoenix, AZ 85014.

Offer Hugs From Home Condolence for the family of WILSON, WARREN EVANS