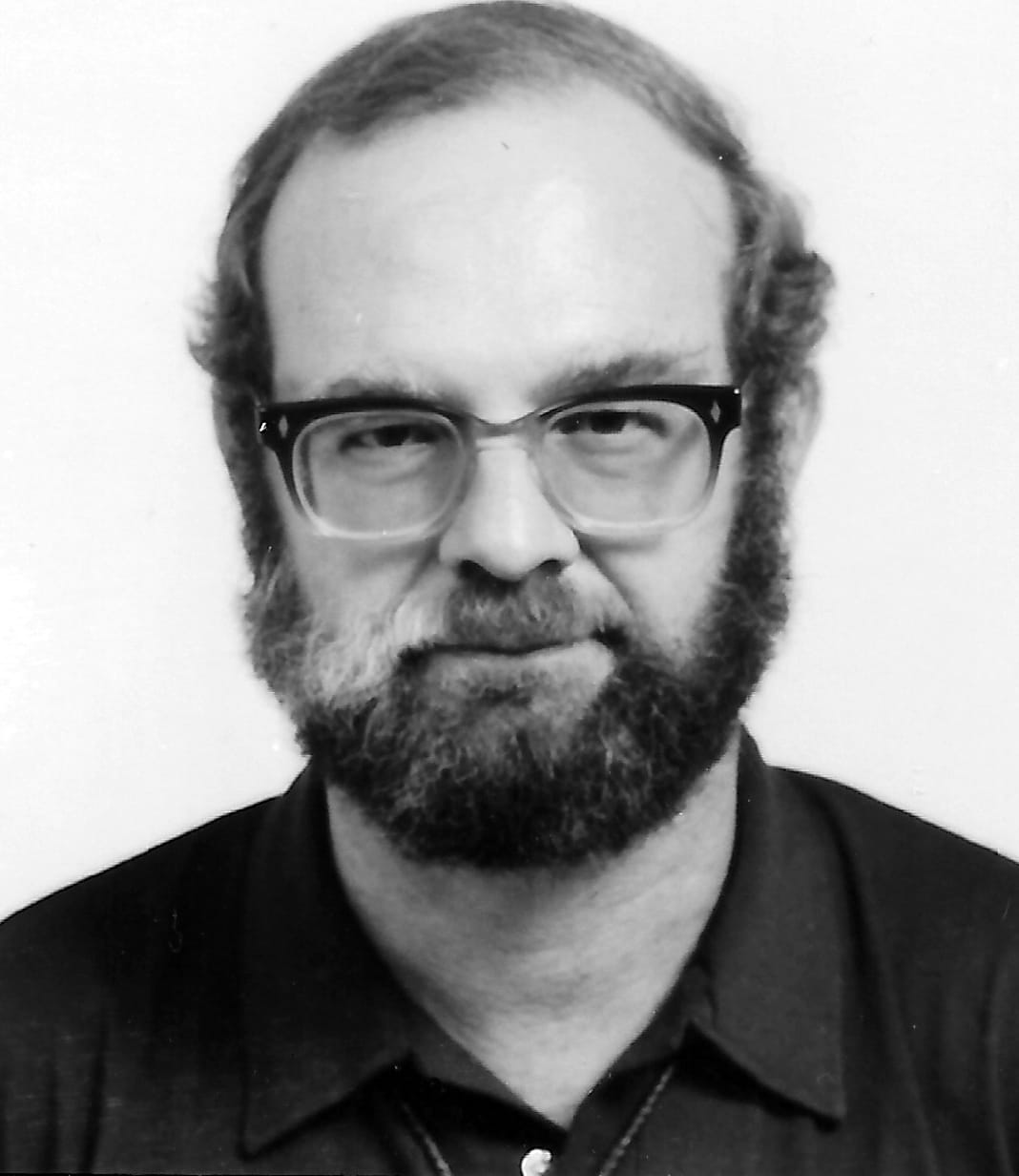 John Anthony Winters passed peacefully on December 4, 2021 surrounded by family. John was born December 10, 1940 in Portland Oregon to Laura Genevieve (Greff) and Harry Joseph Winters. John was the second of 4 sons. The Winters family moved back to his mother’s birthplace in the Garfield neighborhood in Phoenix, Arizona, in the fall of 1954.

John attended St. Mary’s High School in downtown Phoenix, graduating in 1958. John was heavily influenced by the Franciscan order at St. Mary’s. He held Saint Francis of Assisi in high esteem and emulated the Saint’s imitation of Christ’s life and belief that nature itself was the mirror of God. John was a proud St. Mary’s Knight and remained supportive of the school throughout his life. He was honored at a halftime ceremony in 2019.

John enrolled at Arizona State College, now Arizona State University, in the fall of 1958 and majored in English. John was an avid poker player and attended regular games, paying some of his college tuition with his winnings. John was an active member of the Newman Catholic Student Center at ASU and remained supportive of the organization. John went to work for the Southern Pacific Railroad in 1959 as a telegrapher and train order operator working at stations across southern Arizona.
John met Miriam (Mimi) Therese Jennett through their mothers. They became friends and fell in love. John courted Mimi over the next four years during her studies at Saint Catherine University in Minneapolis, Minnesota. They were married June 21, 1966 at Saint Agnes Catholic Church.

John began his journalism career at the Scottsdale Daily Progress as a reporter and worked there when the young couple was married until taking a job at the Tucson Citizen in 1969. John completed a baccalaureate degree in English and pursued graduate studies in History at the University of Arizona while he worked at the Citizen, honing his skills as a reporter.

John returned to Phoenix in 1975 to work with the Arizona Republic as an investigative reporter, taking the beat crime reporter Don Bolles left vacant when he transferred to the State Capitol to cover the legislature. Bolles was murdered in 1976 in an assassination that was linked to prominent Arizona businessmen and criminals, many of whom were never officially charged, tried, or convicted. Immediately following the bombing that resulted in Mr. Bolles’ death, Republic editor Bob Early assigned John to an investigative team that also included Charles (Chuck) Kelly, police reporter Jack West and Paul Dean. The team’s work was part of an investigation that ended with the arrest and convictions of several individuals tied to the murder.

The Bolles murder was the primary catalyst for The Arizona Project, led by The Investigative Reporters and Editors, Inc. (IRE), which is considered the first large-scale implementation of collaborative journalism. John consulted with IRE and contributed to the investigative journalism that resulted in the production of a series of wide-ranging investigations and related articles that tied prominent Arizona families and politicians to organized crime, illegal immigration, land fraud and other criminal activity throughout the State. The project was completed in 1977 and published in several Newspapers throughout the country however many publications, including the Arizona Republic, opted to reject, or run greatly edited versions of the series.

John continued his investigation of organized crime in Arizona, building on the work of the IRE, and on June 25, 1978, under pressure from John and 5 of his Investigative colleagues, the Arizona Republic published a 17-page dossier on criminals in Arizona that amounted to a detailed rogues’ gallery as a special section.
In 1982 John traveled to Afghanistan to cover the Soviet occupation and war with a focus on biological warfare and human rights abuses. Through these trips he connected Afghans with local Arizona physicians that provided medical assistance to the region. 3 years later in 1985 the Arizona Republic received unconfirmed reports that reporter Charles Thornton was killed in Afghanistan during an attack by Soviet Military Forces that also injured Photographer Peter Schlueter while covering the war on a trip organized and funded by humanitarian aid groups. With less than 2 days’ notice John volunteered to travel to Afghanistan to cover the news, locate Mr. Schlueter and negotiate with the Mujahideen for the possible return of Mr. Thornton’s body. Mujahadeen forces alleged they had recovered Mr. Thornton’s body and held it for ransom, claiming that the organization had not followed through on promises to provide a hospital in the area. Mr. Schlueter escaped to Pakistan and returned to the US. Mr. Thornton’s body was never returned. John received a Silver Ingot award for his efforts.

John was an honest and relentless reporter. He brought a sense of mission to journalism. He was a straight shooter and his sources always trusted him. His integrity and reputation allowed him to effectively gather information from a wide range of sources in government, business, and the criminal underworld. That information was invaluable to complex critical investigations related to major political and social issues. He was extremely organized and produced numerous, award winning works of investigative journalism including articles or series on organized crime, Political corruption, the war in Afghanistan, Narcotics trafficking and Immigration. John was active with his union and represented his colleagues in dealings with ownership and management. John took early retirement from the Arizona Republic in 1991 after a 28-year career as an investigative journalist during a time of transition in the industry that was not accommodating to the senior writers, editors and staff of the newspaper.

John obtained his private investigators license after retiring from the Republic and spent the following years pursuing a wide range of investigative work with a diverse group of clients. He worked with the Arizona Department of Public Safety on criminal investigations of major crimes and was hired as a private consultant to investigate agencies such as the Maricopa County Sheriff’s office and the Chandler Police Department in defense of the civil liberties of immigrants and those unfairly profiled by law enforcement.

John was a lifelong advocate for the poor and those less fortunate in the community. John volunteered with the Society of Saint Vincent De Paul an served as the president of the Saint Thomas Aquinas chapter for two terms between 2012 and 2017. He was a member of Voice of the Poor- the advocacy arm of the Society of St. Vincent de Paul. Voice of the Poor identifies issues critical to those living in poverty and need and helps bring attention to them so communities and elected officials can develop strategies and tactics that will provide the most effective and efficient means to reduce or eliminate poverty. John made trips to Washington DC to take part in meetings and monitor Congress as an advocate for his community. As a fellow member described John- “To John, St. Vincent de Paul was more than a volunteer “activity” it was a vocation and a passion… a calling to serve God and His poor. He was a true servant leader, always leading both by example and consensus…He walked the walk and put faith into action”.

John was an avid outdoorsman and shared his love of nature and wild places with his family, taking them on adventures across the Southwest and into Mexico. The family explored the Colorado Rockies and New Mexico on annual trips to the family farm in Iowa which always had a fond place in his heart.
John was a devoted family man and both he and Mimi came from large Phoenix families. They expanded their immediate family of 4 by welcoming 4 children into their lives through adoption including one of their granddaughters. They were godparents to many of their nieces, nephews, and friends. They supported and provided a home to many individuals and families in need over the years in a household that was unconventional and at times chaotic but always full of love, creativity and life.

John received a kidney transplant in 2016 and the family is forever grateful to the donor and their family for that gift of life. John had a full life filled with all the joy and sorrow one may expect from a life well lived. He will be greatly missed and always remembered. John was preceded in death by his parents, brother Nicholas, and son Joseph Anthony. He is survived by his wife Miriam, sons Christopher (Yasmin) and Benjamin (Sondra), daughters Mara (Wendell), Monica Calderon (Ernie), Francesca and 11 grandchildren and 3 great grandchildren. A Funeral Mass is planned for 10:30am on Friday, March 11, 2022 at the Franciscan Renewal Center located at 5802 E. Lincoln Dr., Scottsdale, AZ 85253. The Mass will be followed by a reception at the home of Chris Winters and Yasmin Al-Mutawa at 2524 N. 53rd Street, Phoenix AZ 85008. Condolences may be expressed at www.whitneymurphyfuneralhome.com

Offer Hugs From Home Condolence for the family of WINTERS, JOHN ANTHONY