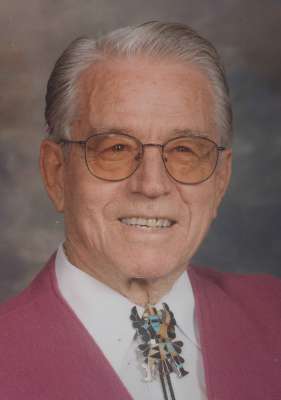 97, of Scottsdale, passed away peacefully on April 22, 2015 to be reunited with his beloved wife, Wanda. He was born and raised in Melcher, Iowa, the son of Martin and Margaret Wood. After high school, he enrolled in the business college at Chillicothe, Missouri where he also played the saxophone in the school band. There he met his future wife, Wanda Fae Ulrich. After graduating, he relocated to Denver, Colorado and married Wanda in 1939. World War II brought an Army enlistment and numerous relocations for the young couple. After the war, Dave and Wanda moved to Phoenix, built their own home, raised three sons and established a successful landscaping business. Dave loved the outdoors, and enjoyed hunting, fishing, camping and boating with his family and friends. Continuing his military career in the Army Reserves allowed him to attain the rank of Lieutenant Colonel. He was an active member of the North Phoenix Rotary Club. Dave and Wanda were enthusiastic travelers and loved going on cruises with their friends. He is survived by his sons, David, Jr. (Laura), Douglas (Debra) and Daniel; grandsons David III (JoBeth) and Eric; and great-granddaughter Savannah. Private services will be held at the Springs of Scottsdale. Donations may be made to Paradise Valley United Methodist Church, where Dave was a longtime member. Arrangements entrusted to Whitney & Murphy Funeral Home.

Offer Hugs From Home Condolence for the family of WOOD, DAVID JOHN