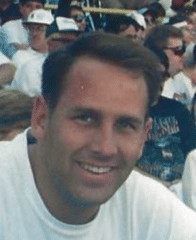 He is survived by his parents Dick and Sharon Woods, together with his siblings Lisa Kamps and her husband Spencer, and Jimmy and Doug Woods. John is also survived by loving aunts and uncles, his nephew Charlie Kamps and his nieces Annie, Maggie, and Samantha Kamps and many cousins. A very gregarious man, John made friends in all walks of life and will be sorely missed.

Born in Phoenix, on May 13, 1973 John attended Madison Meadows School and graduated from Brophy College Preparatory in 1991. After a couple of fun years as an Arizona Wildcat, John turned his attention to his passion, baseball umpiring. His first professional assignments were in the independent Northern League in 1995, and his best story from that season was calling Daryl Strawberry out on strikes. He worked in the Texas/Louisiana League the following season and then broke into organized baseball in the Arizona League. After successful completion of the Jim Evans Academy of Professional Umpiring in 1996, John worked in the Northwest, Midwest and Florida State Leagues before spending three seasons in the Class AA Southern League. When his tragic accident occurred; he was preparing for his second season of winter ball in Venezuela. John had been assigned to the AAA International League and his prospects for a position in Major League Baseball were excellent when his career abruptly ended, John’s Catholic faith was always important to him and he was a dedicated volunteer minister at St. Francis Xavier Parish. He also enjoyed a special bond with his autistic brother, Jimmy, for whom he was a caretaker for much of his adult life.

Friends are welcome for a 2:00 p.m., Friday, February 19, 2021 Funeral Mass at St. Francis Xavier Church, 4715 North Central Avenue, Phoenix. A private burial service will follow. For those unable to attend the Mass you may view the service via live stream at: www.sfxphx.org/livestream. In lieu of flowers the family suggests donations to SARRC (Southwest Autism research & Resource Center) “in memory of John Woods, beloved brother to Jim Woods” at www.autismcenter.org or 300 N. 18th St., Phoenix, AZ 85006. Condolences may be expressed at www.whitneymurphyfuneralhome.com.

Offer Hugs From Home Condolence for the family of WOODS, JOHN