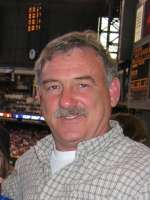 The family of James H. Wright III sadly announces his passing at home on January 5th, 2011 from complications of kidney cancer. Jim was 59.
Jim was born in Macon, GA, on September 24, 1951. He attended the University of South Carolina before moving to Phoenix in the mid-70’s where he established himself as a successful real estate professional. An avid athlete since childhood, Jim excelled in water skiing, target shooting, and snow skiing. He was passionate about motorcycles, the Arizona Cardinals, and the Georgia Bulldogs. Until his last days, Jim was still enjoying Eric Clapton, laughing with friends, and watching football.
A man of strong faith, Jim was always willing to provide support and encouragement to colleagues, friends and family. His positive outlook was based in his faith that all things are in God’s hands and work to His will. He believed in doing the right thing, regardless of the implications or the effort required. Jim always said “When you have to take a step- step up, not down.”
Jim was preceded in death by his beloved wife Nancy Gustafson Wright and his sister Sandra Wright Williams. Survivors include his father and stepmother Howard and Martha Wright, his mother Lillian Moye, his brother Marvin E. Wright, his children Cameron Collier, James H. (Bo) Wright IV and Bradley Wright, grandson Tyler Adams, his companion Andrea Abkarian and numerous cousins and nieces.
Jim’s family wishes to thank The Ironwood Cancer Center for their care and support over the past nine months.
Visitation will be Monday, January 10, 2011 from 4:00-7:00 PM at Whitney & Murphy Funeral Home, 4800 E. Indian School Rd., Phoenix. Following a private interment, a Memorial Service will be held at 1:00 PM on Tuesday, January 11, 2011 at Foothills Baptist Church, 15450 E. Chandler Blvd., Phoenix. Donations in Jim’s name can be made to the Foothills Baptist Church for local missions.

Offer Hugs From Home Condolence for the family of WRIGHT, JAMES HOWARD