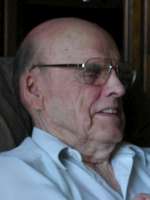 was a beloved husband, Father, Grandfather, and Great Grandfather. Harold moved forward into heaven on April 17, 2010 at the age of 90 in Phoenix, Arizona. Harold is survived by his loving wife, Ida Wyatt, who was at his side. Harold and Ida were blessed to celebrate their 65th wedding anniversary on January 6, 2010. Harold was born on October 26, 1919 in Clinton, Iowa and moved to Arizona in 1957. Harold loved the Sonoran Desert, spent his career working for APS putting up some of the first power lines here in the Wild West, including the Grand Canyon. Harold loved nature, xeriscaping, photography, painting, jewelry design and mechanics. His paintings and art are of beautiful Sonoran desert scenes celebrating the subtle blooms and beauty of cactus. Some of his art depicts the lonesome life of a cowboy dreaming on a cloud. His photography ranged from family and friends to birds and the beautiful nature he loved. He had a passion for Native American art and jewelry and embraced the culture and life he met when he moved to Arizona. Harold spent his life creating an amazing garden of rare cactus in his backyard. Harold was part of the xeriscaping movement here in Arizona before it even had a name. He knew beauty when he saw it and cultivated it. He nurtured his beautiful cactus during freezes, hot summers, and let them thrive in the beautiful weather. His golden barrel cactus and totem poles rival even those at the Botanical Garden. Harold was also a loving father to seven children, one who was lost at birth. He is survived by all other children, seven grandchildren, and four great-grandchildren. He is also survived by his brother and sister, Jack Wyatt and Betty Lou Kelly. His will join his brothers, Don and Gene Wyatt, in heaven. Harold spent his life as a devoted Roman Catholic and believed and acted in his faith by living and teaching his family. He will be missed by the congregation at Our Lady of the Valley Church where he devoutly attended services for over 30 years. Harold was also a decorated veteran of the USMC. He received his 60 year Diamond recognition as a member in good standing of the IBEW. His passing is marked with love and peace. Rosary at 12:30 pm, with a Funeral Mass at 1:00 pm, Friday, April 23, 2010 at am, at Ss. Simon and Jude Cathedral, 6351 N. 27th Avenue, Phoenix. Interment will follow at Holy Cross Cemetery. 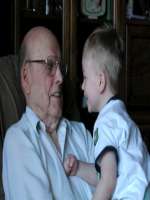 Offer Hugs From Home Condolence for the family of WYATT, HAROLD EDWARD