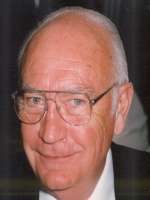 Merle Marvin Yard of Phoenix, Arizona, passed away at the Surprise Hospice of the Valley on June 5, 2012 after a short, brave battle with esophageal cancer. He was 91 years old. Born in Farmersville, Illinois on October 27, 1920, Merle truly was one of the dwindling numbers of the greatest generation who experienced more in a lifetime than most people can even dream about. He enlisted in the U.S. Army Air Corps in 1937, and as he told it, his father drove him to the train station, gave him $5 in spending money and told him “30 years would pass in no time.” He was a First Sergeant by the time he was 21, and with the outbreak of the war, he volunteered for Officer Candidate School where he received his Second Lieutenant’s bars and shortly thereafter his pilots wings. It was during his training at Chanute Field, Illinois that he married Helen (Brown). They were married for 38 years until her death from cancer in 1980. Merle went on to serve as a bomber pilot in the Italian theater in WWII and eventually Korea, flying B-17s, B-24s, B-26s, B-29s and various cargo and select fighter aircraft. He became a Command Pilot and retired as a Major from the USAF in 1961 after 24 years. He promptly returned to Phoenix and resumed his working career. In civilian life, he was a regional sales representative for Carling Brewery as well as Lawn and Garden Supply Company before he ended his career as the Director of Maintenance and Grounds for Phoenix College. During his time at the college, he met his devoted wife Annette (Ramoino), and they enjoyed many years together traveling around the world. Under no illusions regarding the terminal nature of his illness, Merle was quick to point out that he had a “great 91 years” during his lifetime and had few regrets. His family is certainly grateful for the memories. Merle is survived by his wife Annette; son Kevin (Linda); step daughters Jeanette and Paula; grandchildren Randal (Brooke), Todd (Lydian), Amy, Crista (Clint), Paul (Elizabeth), Matthew, Gabriela, Talia and Dominic and six great-grandchildren. He was predeceased by his step daughter Marie. Merle will be given a Memorial Ceremony with full military honors at the National Memorial Cemetery of Arizona, 23029 N. Cave Creek Rd., Phoenix on Friday, June 15, 2012 at 9:30am. The family asks that in lieu of flowers, donations be made to Hospice of the Valley, 1510 E. Flower St., Phoenix, Arizona 85014.

Offer Hugs From Home Condolence for the family of YARD, MERLE MARVIN